Back Again, and Blown-Over Trees 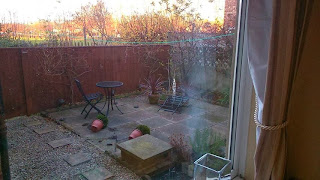 I'm back blogging again, as my laptop is now back from the repairman! Not much to report, except for some storm damage to the back garden - see photo!

Everything's been repaired. I was hoping I would need to do less to the garden in the winter. Turns out I was wrong. I think I'm developing that gardener's feel for the seasons, or at least something resembling it, as follows:

More reports on Glastonbury and the fun we had in Malta (where I managed to misplace an entire ship) coming soon.
Posted by CyclingDiver at 13:23