Gifts in the Bible 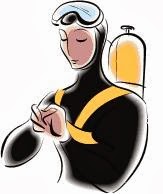 This is an excerpt from a recent piece I wrote for the church Christmas service, "Gifts in the Bible".

...one more story, because it seems I cannot write anything without throwing in a reference to scuba diving somehow. A while back, I read the story “Menfish”, by Jacques Cousteau, which is the account of the first ever scuba dive in what was then occupied France. As Cousteau puts it, when the first ever working aqualung system arrived in the village where he was living, “no child on Christmas morning ever unwrapped a parcel with more anticipation”. With his wife and best friend as support, Cousteau tested the equipment and made the first scuba dive in history. I remember reading that story, and suddenly realising that I was reading part of my own history. Had Cousteau not made that dive, my own life would be very different. What happened in 1940 affected my life 70 years later.

This week, I read the Bible again, especially the Acts of the Apostles and the letters to the Corinthians, which I think may have perhaps the highest concentration of the words “gift” and “giving” in the entire book. The church being established in those books, however imperfectly, was one in which people would love each other, treat each other as equals, and support each other whenever it was needed. At one point, Paul writes to his followers saying “Since you have plenty at this time, it is only fair that you should help those who are in need. Then, when you are in need and they have plenty, they will help you”. I read that passage, thought about the history of Christianity and my own journey in which I arrived at the Unitarian church here in Newcastle, and felt the same sensation: that the actions of people living long before I was born had led, in one way or another, in my receiving a great gift.

(As a sidenote, I have often thought that when you go looking for something in the Bible, you’ll usually find it, but it won’t necessarily be what you expected. Perhaps that says more about the person doing the looking than it does about the Bible.)
Posted by CyclingDiver at 02:14