Glastonbury, Day 2: Gan for a Wander 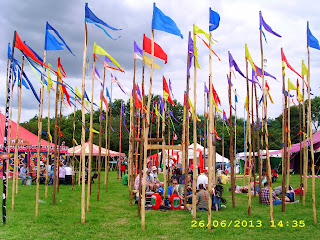 Glastonbury, day 2, Wednesday. It was warm, if not actually sunny, and we were at a slight loose end. The festival doesn't really kick off until Thursday afternoon, and we didn't have a bar shift for a while. We had heard the distant cheer as the car park gates were opened; the punters were arriving, and later we would be needed to sell them beer.

Not to worry. We decided to wander off in pairs. I took R to see the Green Fields, which are usually the bit of the festival that gets set up first - if you're there early, go to the Green Fields as there will be something happening. We wandered around, looked at things, sent postcards (yes, you can post postcards at Glastonbury) and enjoyed a bit of alternative therapy. I had a massage, which I needed, and then fulfilled a small Glastonbury tradition of mine, of going and sitting in a meditation tent for a bit. If you have read my post about arriving at Glastonbury, you will know why.

We found the bar, and I found out when and where one of my favourite bands, "Seize the Day" were playing on the Thursday, by the always-reliable method of checking the sides of the toilets (they always put stickers there). The bar shift came and went. The team were great. My teams always are.

One last thing; as we wandered around the Green Fields, we came across a music space, with a couple attempting to play folk music whilst their young son clawed at the front of Mummy's t-shirt. One of their songs was a rather nice rendition of "The Ghost of Tom Joad". I still fondly remember Bruce Springsteen and the E Street Band playing that in 2009. It seemed fitting that it should be the first live song I heard at Glastonbury 2013.