The Wonderful World of Drysuits 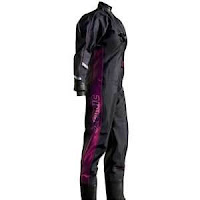 Well, I finally took the plunge. (Sorry.) I have bought myself a drysuit. For those who know nothing about what that is, it’s a watertight fabric suit with built-in boots and rubber seals at the neck and wrists to keep water out. You wear it whilst diving, with a warm undergarment underneath it, and it keeps you a lot warmer than a wetsuit or semidry suit - air is a less efficient conductor of heat, and thus a much better insulator than water.

Given that cold has been a limiting factor on most of my dives, you might wonder why I’ve never bought one before. Answer: they’re expensive. The drysuit itself, plus its undersuit, hose to attach it to the air tank (the suit is inflated at depth from the scuba tank, to stop it being compressed by the increased water pressure), and the training course to teach me to use it safely, cost £500. Had I bought it from a slightly less nice dive shop, i.e. one that didn’t chuck in the hose and undersuit along with the drysuit, it would have been more.

Alas, this was but the start of my expenditure. My semidry fins are too small to fit the bigger drysuit boots, so it was off to Deep Blue Dive to buy a pair two sizes bigger, and thus spend another £99 plus £2 for a beeswax stick to grease the drysuit zip and stop it sticking.

And finally, my old buoyancy jacket is too small to fit properly over the drysuit, so it’s a new BCD for me, at the cost of £360. Yes, it has occurred to me that I could have gone on a week’s holiday for the amount I’ve just spent on dive gear.

On the other hand, it was more than worth it to be able to do two dives in the Farne Islands, including the sitting about on the boat afterwards, and not be cold at all. I had not realised how much of my energy was being taken up on my dives by managing my responses to the cold. I saw far more on the dives than I usually do, simply because I’m not continually trying to win the mental battle against the cold. Much safer and much, much more fun. Never again will I feel my dives cut short by the cold.

Also, the new BCD is fantastic. I’m not on commission, but it’s an Oceanic Hera, specially designed for women, and the joy of a BCD which fits properly and doesn’t make me feel like I’m being hugged by a boa constrictor when I inflate it fully. It has integrated weights*, and for a few moments on the boat, as I loaded in my integrated weight pockets and zipped up the drysuit, I felt like a proper diver.

Until I realised that the reason the regulator wouldn’t screw onto the top of the scuba tank is because I’d forgotten to take the tank valve cap off. Oops.