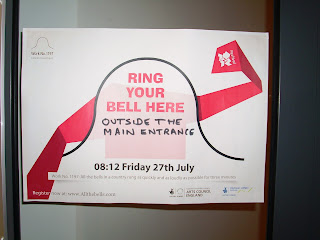 Well, this was going to be another post about diving. But I do other things too, and one of those things on Friday was to mount my bicycle and set forth at an hour earlier than I am accustomed to leaving my home on a weekday, to go and ring a bell and herald the arrival of the Olympics.

The best reason I can give for doing this was “It seems a shame not to join in”. For those who don’t know what I’m talking about, I was ringing a bell as part of Martin Creed’s mass art project, “Work No 1197. All The Bells In A Country Rung As Quickly And As Loudly As Possible For Three Minutes.” I saw an article about it on the Thursday, thought, “Ah, hang on, I meant to find out about that”. A quick Google later, and it turned out that Arts Council North East were taking part.

I arrived at their rather nice office (far better than the Civic – it has hot water and heating and everything) at the back of Central Station on a sunny morning, locked the bike to the nearest railing, and trotted indoors. A motley collection of bells lay on a table, surrounded by twenty people with that mixture of embarassment and good cheer that the British exhibit when asked to do anything communal in public.

We trotted on out, and I unlocked the bike and wheeled it round. I have a rather good bike bell as it has that unmistakeable “bring bring!” sound everyone associates with a bike. (Hence why I have it – I like a bell that says to people: “Bike!”. I have flashing lights for the same reason.) I thought it would be rather nice to include a bicycle, even if it did mean I had to lug the bike around with me whilst everyone else held a dainty bell. Except for the organiser, Bill, who had enterprisingly made his own bell from a tin can with a hole in and one end taken off, a piece of string and a washer.

We stood in the sunshine and listened intently to the radio, then when the signal went at 8.12am it was all go. Amazingly, the motley collection of bells blended together into a charming melody, although one china bell was rung so hard it cracked! People trotted around taking photos with one hand and dinging valiantly away with the other, and even a passing train driver joined in on his horn. We made it onto Radio Newcastle, so if you were listening, the bicycle bell was me – I haven’t rung it so much since I nearly got run over by a lorry.

As it finished, we smiled at each other and went indoors for tea and bacon sandwiches.