Seal Soup, Part the Second (Dive at the Farne Islands) 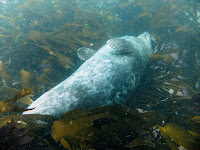 Eventually the site was settled upon, and myself plus buddy (J) fell backwards off the boat and into the water. I spent the next ten minutes trying to equalise my right ear, which was really playing up – always fun when you’re trying to keep track of everyone else. Eventually, at the point where I was thinking of giving up, after much jiggling and swallowing, it slowly cleared with a squeak and I dropped down to my buddies’ level to play with seals.

They were everywhere. It was the first time I’d had seals come up to me and play, or let me stroke their heads. J was in his element, since his definition of the perfect dive is probably something like “Interesting stuff to photograph + seals to play with”. I took a few photos too, one of which was sufficiently good that I later entered it into the Stoney Cove photo competition and won a new torch.  (Not the one above, although I quite liked that one too!)

We paddled merrily along following our dive leader, who was towing an inflatable surface buoy at the request of the skipper, who was concerned about us getting caught in the current. So concerned that he dispatched another diver to inform us that we were getting a bit too close to the edge of the island, where the currents can sweep you round the side if you’re not careful.

We turned around, J and I bringing up the rear with cameras at the ready, and seals nibbling our fins. All apart from one seal, which thought the inflatable surface buoy was the best toy it had ever seen, and decided to hang upside down from it and be towed along. J and I did a quick exchange of hand signals and expressions, which would translate roughly into English as:

We did, waiting for the inevitable moment when the dive leader would realise why he wasn’t making much progress. I wasn’t close enough to hear his response (and I was too busy laughing into the regulator anyway), but I’m guessing from his expression it was “Fucking seal”.

As we reached the end of the island, we ascended gently and rejoined the boat for some tea and buns. The buns were provided by me – they usually are.

The second dive was also fun, and cold. It was around this point I decided that it was time I started to think about getting a drysuit. (Though I did not in fact get one until half a year later, after my trip to Oban. More about that later.) Diving along a reef covered in soft corals with a seal nibbling your fins and a couple of ballan wrasse dancing in front of you should be a pleasure, not an exercise in how long you can endure the cold before you tap your buddy’s shoulder and signal to end the dive. It’s also not fair on the drysuit-wearing buddy, who has to terminate their dives earlier than they actually need to, since they’re not getting cold.

Even so, it was a fun dive. We surfaced and scrambled back into the boat. I needed to be yoicked on by two of the other divers; dignity is not a big part of diving. Once all were safely back aboard, we made as fast a run as possible to get back land. I remember thinking “That was great, and I am now done for the season”. Great dives, but tough and tiring. (It took two days for my back to recover from the pounding we all took as the Moby hammered through the waves back to Beadnell.)