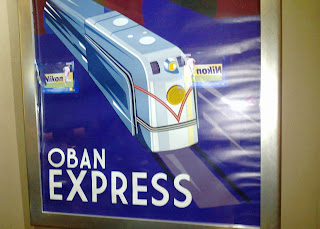 Back in May, I enjoyed a trip to Oban with the Diving Centre Newcastle. This was, as previously mentioned, the trip which finally persuaded me to spend a ridiculously large amount of money on a drysuit. But, I get ahead of myself…

It takes about five hours to get to Oban, but fortunately myself, B and A (two of my regular diving pals) had managed to stick to the old saying about long-distance car journeys, “Always get the person with the fanciest car to do the driving”. At 10.30am on a Friday, therefore, I found myself in the front seat of J’s Jaguar, trucking up up the Carlisle road to Hexham to the tune of “I’m Coming Home, Newcastle.” (Always fun if one of you in the car happens to be a Mackem.)

The drive may be long, but what it lacks in shortness it certainly makes up for in scenery. The scenery on the way past Loch Lomond is stunning. I’m not sure whether it’s my partly-Scottish blood, but part of me looks at Scotland and thinks, “Yes, this is what scenery ought to look like, with the gnarled trees and the moss and the hills and the tumbling burns and everything”. It was gorgeous and, fortunately, so was the weather.

We arrived at the Puffin Dive Centre in time to have a quick shakedown dive off the shore, in which I made the highly unwelcome discovery that my camera battery was flat. Deeply annoying, as, despite what some people thought, I found it was quite a pleasant dive with a lot to see. Plenty of scallops and hermit crabs, a few small fish, some interesting old bottles (apparently it used to be a Navy base, and this is where they would throw the rubbish in the sea), and I spotted an interesting white nudibranch which I would have loved to take a photo of. Oh well.

We headed back to our little cottage in time to have a shower, and for me to make the highly, highly, unwelcome discovery that I hadn’t brought either the spare camera battery or the charger cable. Regretting yet again that I’d managed to buy a camera which doesn’t take standard batteries, I climbed into the taxi, to be greeted by the question “Are you Mary?” from the taxi driver. I explained that no, I was not Mary and indeed none of us were. The taxi driver expressed puzzlement, until we explained that one of us is in fact called Barry.

Needless to say*, he was known as “Mary” for the rest of the trip.

We headed into town to a rather nice pub. Oban is a surprisingly large town. Surprising in the sense that you head along some very small and sparsely-populated roads, then suddenly you drop down into Oban, and it’s actually quite a large place. I would happily spend more time there; I feel a cycling trip along the Campeltown – Oban national cycle route coming on… Back on the diving trip, we ordered our pints and fish and chips, and settled in to talk diving and enjoy a few rounds. The evening was marred only by a bartender who insisted that we hadn’t paid. We insisted that we had paid, because we had. Eventually the manager stepped in and pointed out that two of us had moved tables, so the bartender had got the payments mixed up, and calm was restored. We wandered around Oban a little more, then went to bed to get some sleep ahead of Day 2. Vertical wrecks ahoy!


* if you’re familiar with most divers’ sense of humour.