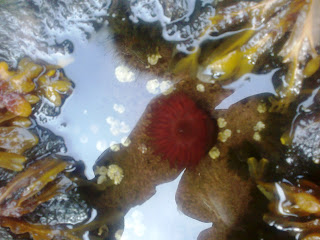 And we rose early in the morning, and hopped into J’s Jaguar to head on down to Oban Harbour, and load all of our gear onto our floating base for the day, the Peregrine. This is one way in which diving in Britain differs from diving overseas, at least in my experience. Just about all types of diving involve early starts, but diving in Britain usually involves hauling a lot more heavy gear about, due to a) absence of paid friendly divemasters to do it for you, and b) diving in Britain requires a lot more stuff. It’s no wonder I’ve started lifting heavier weights at the gym.

Interestingly enough, I recently realised that perhaps part of the reason why of all the hobbies I’ve tried – martial arts and archery included – diving is the one that’s stuck; it plays to my physical strengths. Partly, it’s just that I love the water. I literally cannot remember a time I couldn’t swim, as I was first taken to a swimming pool by my dad before I was one year old – my conscious memory doesn’t get back far enough!

Curiously enough, you don’t actually have to be a great swimmer to be a diver*, although it certainly helps. Most divers don’t need to master anything other than the basic flutter kick, which is the same one used in front crawl, and the fins do the rest. (It’s different for techie divers, who need to have very precise fin strokes to avoid stirring up silt in caves and wrecks.) You do, however, need to be confident being in water, and swimming certainly helps. Bobbing around in the middle of the North Sea in three-foot waves waiting for the boat to find you and pick you up really isn’t the right time to be at all nervous about being in deep water.

Getting back to my point, the one thing I physically lack is speed. I can run. I just can’t run fast. This is affectionally known in my family as the “Curse of the CylingDiverClan”**. None of us have any acceleration, although quite a few of us have done half-marathons and fun runs. Alas, nearly all school sports require the ability to run really fast, and hence my school sports career was best described as undistinguished. I can, however, hit my stride and stay in it for some time.

Since diving requires you to actively avoid doing things fast – it wastes energy and leads to inefficient breathing – but does require continous exertion over a period of around 40 minutes, it’s perfect for me. My fondness for lifting large lumps of metal helps out too. Being able to squat-thrust 30kg in the gym is great preparation for standing up with 13kg of lead strapped around you, and a 12litre tank of steel and compressed air on your back adding another 15kg to play with.

Standing up with all of that on you on a boat is an interesting experience, and one I was about to have. More details on that, and the afore-mentioned McBob, next week!

“Can you see anything?” Polite answer: “Yes, it’s possible to see quite a lot. We can get up to 10m visibility, and there are lots of starfish, crabs, fish and anemones to look at, plus the seals and the wrecked ships.” Honest answer: “No, I love spending half an hour swimming around in the murk looking at nothing.” Though, to be fair, that’s a good description of one or two dives I’ve had at Beadnell Bay, and don’t get me started on Lake Ellerton.


I know, I’m irritable. I used to get deeply irritated when I did martial arts and people would say to me, on learning that this was my hobby: “Ooh, I won’t disagree with you then!” I used to want to reply: “What, you seriously think I’m so violent I’d hit you if you disagreed with me?” I guess one of the great lessons of life I’ve had to learn in the past thirty-odd years is People Like To Make Obvious Comments, and nobody ever, ever, thinks if you might have heard the same thing before and be fed up with answering it.

** No, that is not our real surname. Though it would be pretty awesome if it were.