The Capriciousness of the Scuba Gods 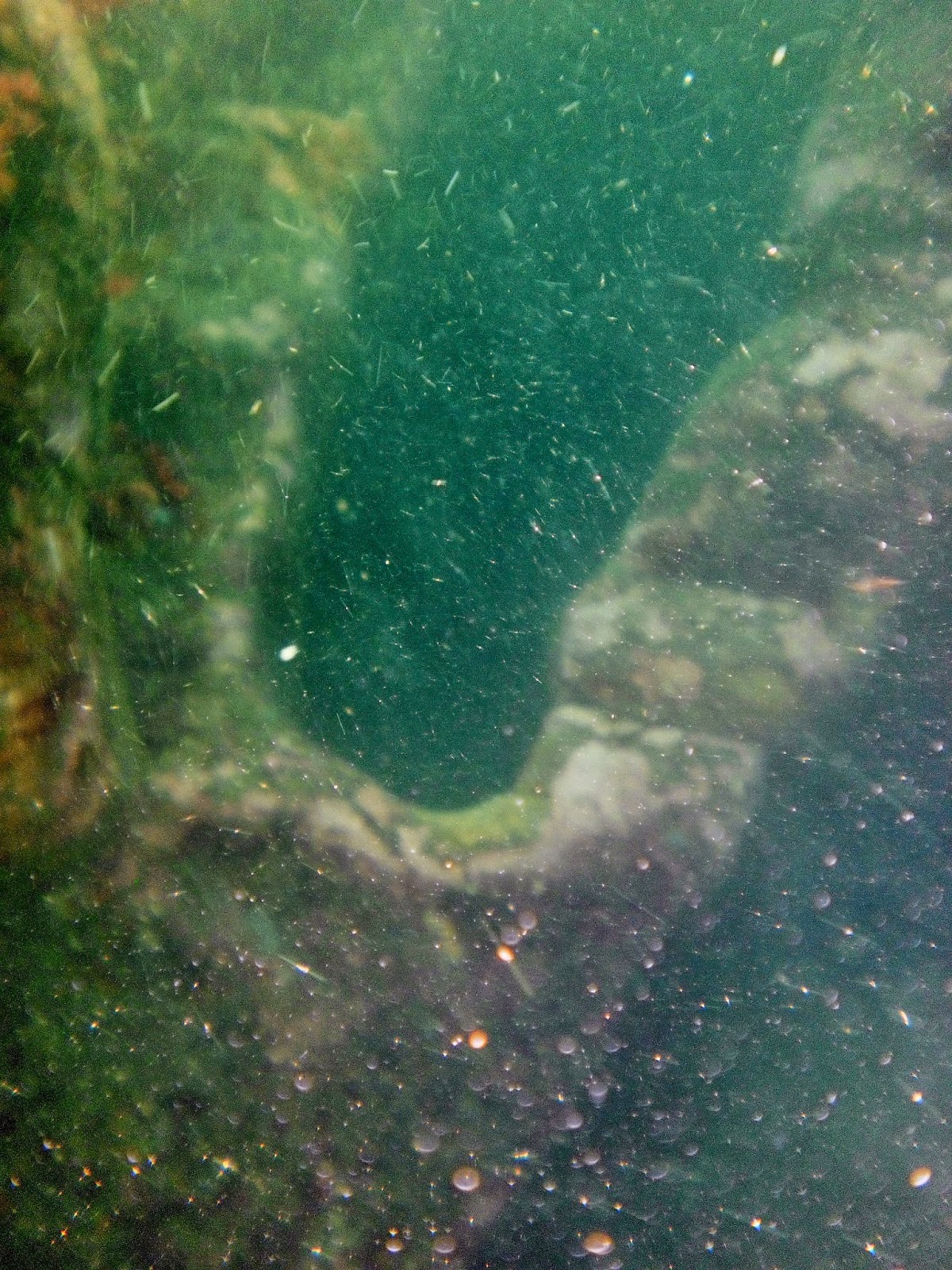 I stayed away from taunting the Scuba Gods last week, instead keeping my mouth shut on Facebook, and trying to organise a dive at Beadnell last weekend. This would not normally be any sort of challenge, but with one dive school having students-only sessions at Brown's Bay on both days, and the other having all its instructors and senior divers off at a training session, it ended up requiring the tactical skill of Alexander the Great, and the diplomacy of Nelson Mandela (knowing me, it may have ended up the other way around).

Anyway, I ended up at Beadnell Bay on Sunday morning with three other divers. Happily, all were of a similar or more advanced level of experience to me. I'm still getting back into the swing of things, and babysitting a less-experienced diver isn't something I want to do until I'm back in practice. One was an old buddy from Malta 2012, who had only ever dived Beadnell as an instructor. This, in practice, means you see bugger-all of the dive site, as your main concern is to ensure that the students pass their tests / don't get lost / don't breathe water. He was keen to see the site, and asked me what the plan was.

I hadn't dived Beadnell in two years, but memory is a fortunate thing - that and spending an hour on Google the night before planning a route. I say "planning"; the great thing about Beadnell is that your dive plan can basically be "dive Lady Hole: swim out with reef on right shoulder, swim back with reef on left shoulder". Whilst all water should be respected, you would have to try quite hard to injure yourself at Beadnell*. I did my very best blagging, managed to sound like I had an idea of what I was talking around.

The name of this dive site is a cause of some amusement to new divers, who think "There must be some other reason it's called that". In fact, most divers have got the sense of humour of twelve-year-old boys, and there is a small swim through some rocks halfway through the dive. This is a narrow cleft in some pink rocks, with dark kelp fringing it on either side, and if you look at the photo above, you will see that it is called Lady Hole for exactly the reason you think it might be.

One reason I was so keen to get in the water was that with sunny weather, we could hope for great visibility, and we got it: 6-8m clear water, which is good for Britain. The crabs, lobsters and mackarel were out in force, and I got some lovely pictures of a lobster. After 40 minutes, my buddy made the twiddly-finger sign of "Time to turn round and head back". I did my best underwater pirouette, and then I saw it. 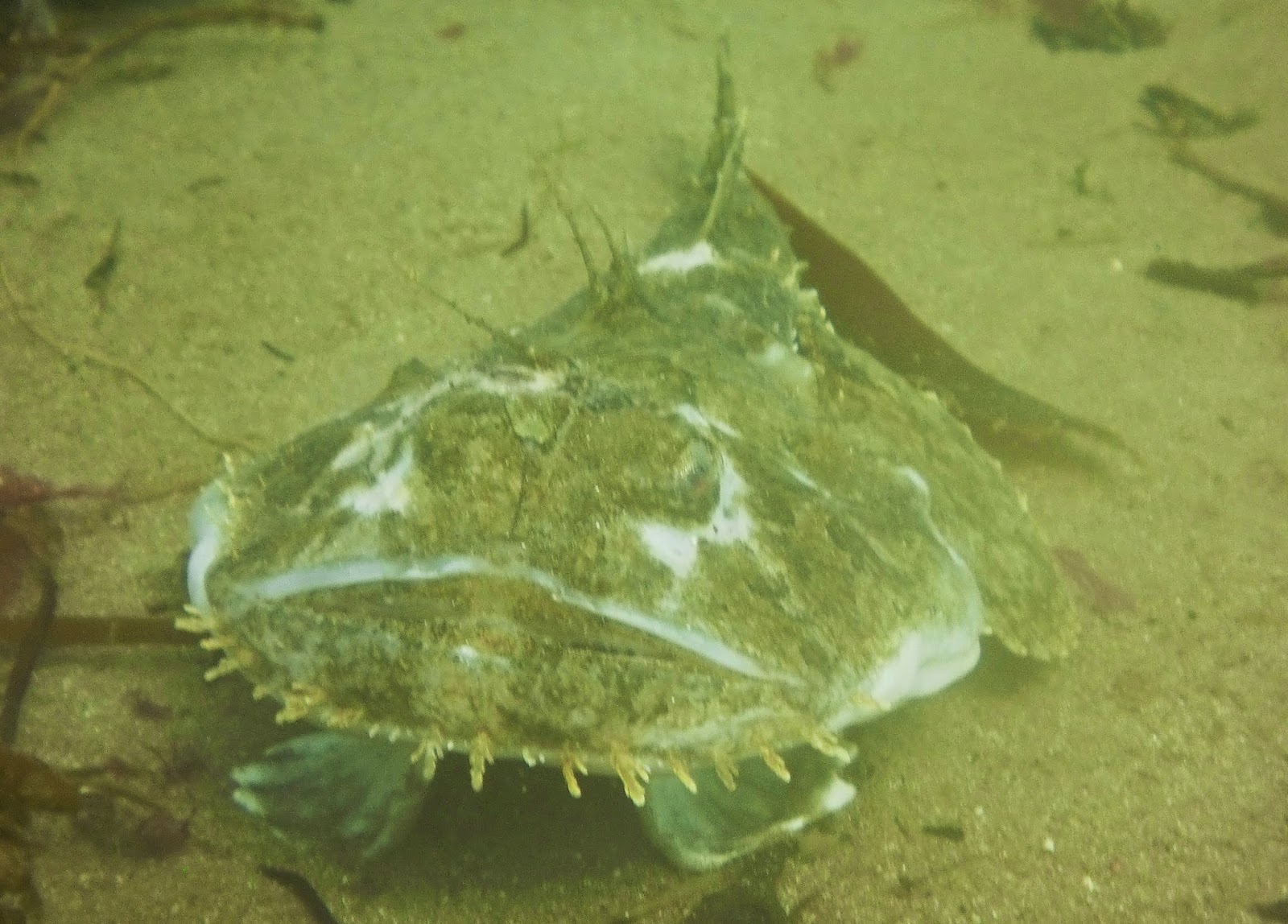 Anglerfish are not common on dives; they are a native British fish, but mostly prefer to live deeper down, beyond the reach of most divers. (They're related to the famously-hideous deep-sea anglerfish, but live on the bottom and ambush their dinner, rather than swimming freely to catch it). Every so often, though, you do spot one that has taken up residence in the shallows. A friend recently spotted one at St Mary's Lighthouse, and right there, just as we turned, was the first anglerfish I've seen in Britain in my diving career to date. (Well, that wasn't about to become my dinner - their other name is the monkfish.)

My buddy was already in front of me, so I got his attention by the traditional method of "grab fin and tug hard". We admired the fish, which was happy to pose for a photo, whilst I turned happy internal somersaults. Few things are more rewarding than taking someone on their first dive on a dive site, and finding a really interesting thing to show them.We left the anglerfish to its dinner, and headed back in search of ours.

Next stop, I hope: Time to Play with Seals.

* Yes, if my next post begins "Broke My Leg on a Rock at Beadnell", you'll know the Scuba Gods have been at it again.
Posted by CyclingDiver at 15:14