Taunt Not The Scuba Gods 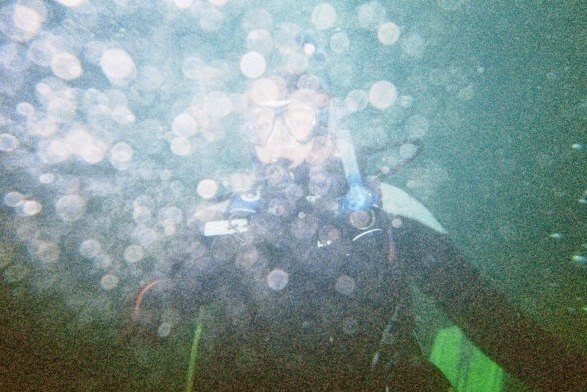 I posted on Facebook a week ago that come hell, high water or crap visibility, I would be back in the water at the weekend. I should have known better.

There was certainly high water; the tide was up as high as I've ever seen it at Beadnell. One possible clue to how this was going to go was hearing the senior instructor comment, as we stared out at the tossing sea, was "Don't worry, its still diveable".

As myself, my dive buddy A and A's teenage daughter paddled out across Beadnell Bay, Daughter of A peered downwards and remarked, with the wisdom of youth, "I can't see anything".

"Perhaps it'll be clearer nearer the reef," I replied, which is one of those things you know is actually a pile of crap when you say it.

"I can't even see your fins," Daughter of A muttered behind me.

Twenty minutes, later, after I’d popped my head up for the third time after losing A and Daughter of A in the silt cloud, A commented: “Coffee and cake on the shore?”

"Coffee and cake on the shore," I agreed. Ahead of me, two pink fin tips headed in the direction of Beadnell village.

I guess last Saturday was a first, of a kind, it remains the only time I've actually called off a dive due to bad viz. Then again, it's the first time I've ever found a reef by swimming into it.
Posted by CyclingDiver at 01:01