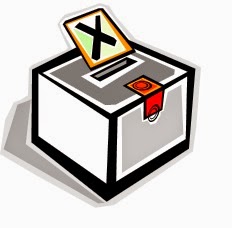 Well, election day rolled around again last week, meaning that I spent 15.5 hours sitting in a church hall issuing ballot papers for the local and European elections. It actually went quite well - busier than I expected, and no really tricky queries, except that a nearby polling station failed to read their register correctly and kept sending some of their voters to my station. Fortunately they were all good-natured about it when I had to send them back.

My Poll Clerk turned out to be an ex-Council employee, who took voluntary redundancy as she was about to retire, and was occupying her time learning to swim and ride a bike. She was also trying to read a book on her Kindle. I never learned the  name or author of the book, and I suspect nor did she, as everytime she opened it, she would get one minute's reading time, then someone else would walk in to vote. By 5pm we were calling it the magical voter-summoning book.

No really difficult queries or customers, although I did have one really classic conversation:

Voter: "Why are the ballot papers marked with pencils, not pens?"

Me: "You can mark them with a pen if you like*, but we have pencils in the booths because they don't run out like pens do."

Me: "Well, the ballot box is sealed with two seals, it gets sealed closed at the end of the day by me, then taken straight to the count and only opened when they're ready to start counting the ballot papers. If anyone wanted to tamper with a ballot paper, they'd have to get the rubber out in front of two other people on the counting table, the person observing the counting table, plus every other person in the room who happened to be looking, including the police and the local councillors."

Upton Sinclair once commented that it is very hard to get someone to believe something if their salary depends on their not believing it. To that, I can add "and if it interferes with their pet conspiracy theory".


* This is legal, should you wish to do it - so long as your vote is clear, you can mark the ballot paper in pencil, pen or crayon if you like.