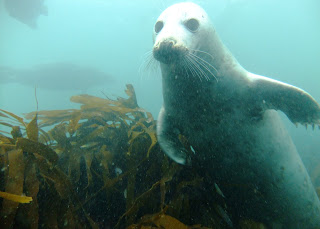 Many island cultures around the world have folklore tales of selkies, mythical creatures who were half-human, half-seal. Traditionally, every seven years the selkie would come ashore and slip off its seal-skin to reveal a human form. Having visited the land, the selkie would don its skin again, unless prevented by a human who wished to marry it, and slip back beneath the waves. Many legends tell the tale of the selkie wife or husband pining for their seal-skin, locked away in a chest by their human partner, who feared the return of their loved one to the sea.

Around the time of spring I feel a certain empathy with the selkie, as my other skin is currently hanging in the cupboard under the stairs, and has been since last autumn, when the weather turned cold, the sea turned cloudy, and the animals and plants dwelling within it went to sleep for the winter. The British scuba diving season is generally considered to run from the Easter bank holiday until October, or whenever the winter begins to make its presence known. Like the selkie, the landlocked scuba diver may stare forlornly at their skin, dangling uselessly from a hook.

Unlike the selkie, the diver is free to don their other skin as soon as they choose, and spring is the time for doing so. Like most divers, I actually have three “other skins”; a thin wetsuit for warm water, a thick wetsuit with hood, boots and gloves for cold water, and a two-layered drysuit for colder water, which is the one that tends to see most use in spring.

As I re-don my scuba gear for the first dive of the year, I wonder at what a strange beast the scuba diver is. Jacques Cousteau called us “menfish”, and indeed we are a very odd species. It’s hard not to be aware of the limitations of the human form in water. We are highly capable surface swimmers and shallow divers, but to dive deep, we need to find some substitutes for the abilities other species have evolved as part of their physical being.

In place of fish-eyes to focus in water, I place an air-filled mask over my face to enable myself to see. In place of a seal’s tail, I don large plastic fins to propel myself through the water. An inflatable jacket and weight belt take the place of a fish’s swim bladder to control buoyancy at depth. A torch supplies the extra light that eyes which evolved on the savannah of Africa need to see clearly in depths where the red light from the sun’s rays cannot penetrate.

The drysuit mimics a seal’s insulation. Where the seal has blubber, a diver has a quilted jumpsuit, and where the seal has fur, the diver has a watertight suit that traps warm air next to the skin. Finally, where a seal can rely upon its highly efficient lungs and blood chemistry to dive for up to two hours on one breath, the human diver must strap a large tank of air to their back and fit a mouthpiece into their jaws if they wish to be under the water for more than a few minutes.

It’s perhaps no wonder that a scuba diver on land can be nearly as clumsy as a seal on a rock, and as eager to get into the water, where all our weight is supported and we move freely in three dimensions. As we re-enter the water, it’s good to pause a moment and reflect. Are we less than the seals, since they can so effortlessly do what it takes us so much effort to achieve? Are we more than the seals, since instead of evolving all these adaptations, we instead evolved a brain that can built devices to enable us to dive deep, to fly and to travel faster than the fastest land mammal on earth can run? Are we simply equal, but different?

These questions are important, but they tend to last for no more than a moment. The seals at the Farne Islands are calling, and it’s easy to feel that they miss their human playmates, as they rush to the edge of the rocks to see our boat, barking excitedly. As we slip back beneath the waves and the seals wriggle towards us to nibble our fins and allow us to pet their heads like dogs, we modern selkies might spare one more thought for the origin of the selkie myth.

Some people think it originates from when travellers of different appearance to the natives of the islands came to visit. Upon seeing humans with dark hair and eyes appearing from the sea, the islanders’ tales of their visitors became tales of human-like seals. Most people who have interacted with seals might be tempted to think that the answer is simpler. No one can look into those huge, expressive eyes, and not see a fellow creature looking back. Life returns to the sea in spring, and so do we.
Posted by CyclingDiver at 22:36