Assertiveness for Divers, Part 3: Your Buddy is Not a Telepath 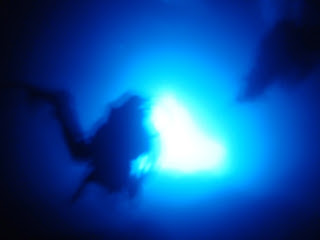 And the final section of this little essay, and one of the trickiest things I've had to learn as a diver: assertiveness with your buddy.

By this, I don't mean aggressiveness, or in-your-faceness. I don't mean a situation where you're telling your buddy "We have to do it my way!" Unless they're proposing something completely hare-brained, like diving to 40m on a 10l cylinder, playing with Great White Sharks, diving in caves with one torch with elderly batteries, in which case, have at it and / or, find another buddy.

For me, it's always been a more of a subtle thing. It's easy not to rock the boat, particularly if it's your regular buddy. After you've done it a few times, a buddy check can seem a bit superfluous. And you know which route you're following round the site - after all, you've dived it umpteen times before. And you're pretty sure you've both got the same goal for the dive. And you don't want to sound too much like a newbie diver who does everything the PADI manual way...

...except that, without the buddy check, you might not realise that your buddy has recently started wearing integrated weights, not a belt. Or that they've bought a new BCD with different releases. Or that one of you wants to stop and take pictures with the new camera. And when you get into the water, it turns out that the visibility is a lot poorer than you expected. And your buddy still wants to take photos, and the next thing you know when you pause to look round, they're not there and you can't see them.

I could keep going in this vein, but I think the point is coming across. Admittedly, everyone dives differently. I wouldn't try telling more experienced divers than I am what to do with their buddies. I do know, however, that it took me a while to get this point in my head, and to have the courage to risk looking like I'm overly-cautious, or that I do it too much by the book, and ask my buddies to do a proper buddy check with me. I'll also ask everyone I'm diving with to confirm the plan for the dive, anything they want to watch out for on the dive, what the plan is if we get split up, and where the car keys are. (By which I really mean "If it all goes tits-up and we have to drag you back to land, what's the quickest way to get to the mobile phone and call the ambulance?").

As for under the water... I say this goes double. Maybe it's me, but I find it can be tricky to communicate with other divers at the best of times, which is why I now carry a slate and pencil at all times. Sign language is great when it's all going well, but throw in some more vis or an unexpected problem, and trying to get the point across can be tricky. I came across this on a dive to Malta (remember that?) when my BCD shoulder valve leaked on the first dive of the holiday, and dumped all the air out of the jacket, and thus out of my cylinder.

I think there's a temptation under the water to not want to have to hold up the dive, to stop and say "Actually, I think there's a problem". This is not helped by the fact that some divers like to take off like rockets into the distance. I'll admit this is a pet peeve of mine; I really wish more divers in groups would actually stop and look around to check everyone is okay and keeping up, rather than leaving it to anyone having a problem to signal this. There can be a real temptation, when the dive leader signals "Ok?" to reply "Ok!" instead of "Problem over here!" and just think, "hey, it'll sort itself out".

I fell prey to this. I did, eventually, manage to signal my buddy that I had problems, but that was twenty minutes into the Dive of the Leaking Jacket (albeit it took me ten minutes to figure out what was happening). The first time around, I tried writing on the slate "Jacket leaking?" My buddy checked and wrote "Looks fine!" (Of course it did, I later realised - it had leaked all the air out, and thus wasn't visibly bubbling - I should have filled it with air whilst she was looking!)

It took me another five minutes to pluck up the nerve to go back to my much-more experienced buddy and try again to say "Actually, this dive really isn't working for me". This time around, I figured the solution, and showed her my air gauge, which showed I'd used about twice the air I normally would on a dive at this depth for this duration. This got the point across, she swam off to notify the dive leader, and he and I headed off at 3m to return to dry land and repair the valve.

And again, I learned a valuable lesson. Don't misunderstand me. I would never abandon my buddy or leave them to struggle, and I know they would do the same for me. But when it comes down to it, you are going to go play in an environment where, as Captain Bob Bates memorably paraphrased it, "where a single breath of the ambient atmosphere will, kind reader, fucking kill you" (Snappy Banter website.)

The more I dive, the more I firmly believe that if you are not prepared and able to complete the dive using your own resources, if you are relying on your buddy to get you through it then, unless it's a teaching environment when your buddy is the instructor and is there to keep an eye on you, you are in a really dangerous situation. To quote another scuba website, "It's a buddy, not a crutch". You don't need to be prepared to do the dive if it all goes right. You need to be prepared to handle the dive if it goes wrong. If something happens to your buddy (leaking regulator, cutting themselves badly on some sharp wreckage, severe cramp meaning they can't swim), then you are going to have to be prepared to take charge of the dive and get the two of you safely back to terra firma.

I love diving. I also love driving my car. In both cases, I keep my skills in tune, my equipment maintained and an eye on the prevailing conditions. And because I do that, I've returned safely from every drive and every dive I've had (so far). And I find that when you include the risks in your dive plan, you can head out feeling more secure than if you ignore them, because you know what to do.