Here's an account of a dive I did last year - one of my favourites to date. In other news, I've recently purchased a drysuit, and will be taking it out for a spin tomorrow. Updates as and when...
When the skipper of the boat begins the safety briefing with “Right, grab something in the middle and hold on tight, ‘cos Alton Towers has got nothing on this!”, you know it’ll be an interesting day’s diving.

It started with a demonstration of Murphy’s Law. I’d got up early especially to get to the Farnes by 8am, as I always seem to start my dives up there with rushing frantically to be on time. I was the second one there, just in time to find out that the boat would be leaving later than usual because the tide wasn’t in far enough to be able to launch the boat without getting stuck on the rocks. Such be life. 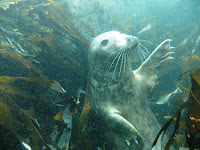 Eventually, we got the nod from the skipper, kitted up and loaded the boat, and escorted the Moby down to the water. Diving from a RIB from Beadnell is always an interesting experience, as the tractor drags the boat into the water, then everyone makes an undignified scramble over the side and into the boat. We perched on the sides, and hung on for grim life as the skipper turned the boat to face the waves.

He was right. I have dived from the Moby on several occasions, but this was by far the bumpiest ride I’ve ever had out there. At one point I looked at the prow of the boat as it headed into a wave at a perilious angle (think of that publicity shot for “The Perfect Storm”, and you’re getting there), realised that I could see only walls of grey North Sea water on either side, and thought “Oh shit". At times like this, as the boat tips up one side of the wave and then suddenly drops down the other, I find it helps to have blind faith in the person driving the boat. Rationality isn’t really high on the agenda.

Eventually, we bumped and surfed our way out of Beadnell harbour, and headed to the Farne Islands, where we spent a fair amount of time pootling around trying to find a site that was actually going to be safe to jump over the side into. The waves were not making this easy. Naturally, it was at this moment that I remembered I’d forgotten to bring my SMB and reel, and spent five minutes mentally kicking myself for being a crap Rescue Diver.

We debated the merits of a dive in what was soon dubbed Seal Lagoon, behind the lighthouse, and decided that whilst playing with seals would be fun, 4m was a little too shallow. On the plus side, we did get to watch the seals from close up, many of whom wriggled into the waters and swam over to peer curiously at us. (Apart from Dad Seal, who lay regally on a rock, regarding us with a baleful eye.)

To be continued...
Posted by CyclingDiver at 11:48