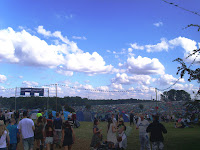 We strolled off the coach, attached our backpacks to ourselves, and staggered off in search of the WBC person who was handing out the badges and directions. Having acquired both, we yomped off across the site to the WBC camping village. As is the inevitable way of these things, it was at the other end of the site. By the time we’d got there, my shoulders felt they had fused together in the middle.

Fortunately, the sun was out, the grass was dry, and it was perfect tent-putting-up weather. We carefully selected a spot based on my past experience (“Not too near the bar because it’s always noisy, not too far away from the toilets or we’ll have long walks in the middle of the night, not too near the toilets or it’ll stink by Saturday and everyone will fall over our tents in the middle of the night”). We chose to volunteer for an extra bar shift in the Campsite Bar, and set off to acquire some lunch and explore the site prior to our shift.

Leeds hadn’t changed too much from what I remember in 2006, although sadly our campsite back in those days was much nearer the coach park! We ate pizza for lunch at what I’m pretty sure was the same pizza stall I ate my first lunch at at my first Leeds festival. (If I can remember this, how come I can’t remember where I hid the spare shed key last year?) The sun was out, the crowds were roaming, and the site was not yet covered in litter.

It may be apparent that my love for Leeds is somewhat less than my love for Glastonbury. This is largely due to the fact that frankly, I find Leeds a bit boring during the day. At Glastonbury, there is always something interesting or strange happening somewhere. At Leeds, it’s all about the bands and the alcohol, which is great in principle, but a bit dull in practice unless you get lucky and find lots of bands you like.


(Actually, for many people it’s also all about the drugs, the sex in tents and the fights, with added possibility of setting fire to stuff at the end. For us, the first isn’t our thing, the second would have required our other halves to be present, the third was unlikely to happen unless someone really kicked off behind the bar, and the fourth was unlikely to happen unless it got really cold!) This is particularly an issue if, like us, you can’t drink much during the day due to having to stay sober for your bar shifts.

As 5pm rolled around, we headed to the Campsite bar for our first shift. It is a source of some amusement to me that the WBC makes (rightly) a big fuss about briefing its teams, but that at least half the teams I’ve taken to festivals over the years have done their first shift (ever) with no briefing at all, since we always volunteer for the extra-day shifts. This was no exception.

Luckily, both C and A displayed unflappable calm, and got the hang of it with great speed. Although there was some flapping, as the hot weather and the sticky spilled drinks attracted every wasp in a 5-mile radius. We had some quite effective wasp traps, but most of us got stung at least once. I’m normally a peaceful human being, but by the end of the shift, I was standing in front of the wasp traps watching the little buggers flap their last in stale Irn-Bru and shrieking “Die, stripy bastards, die!”