Leeds Day 1, Part the First: Thanks A Bunch, Ricky Wilson

And here I am again, writing up my trip to one of the UK’s many music festivals – in this instance, Leeds, where once again I was leading a team of intrepid volunteers to serve pints behind a bar for six hours a day to raise funds for our trade union. As myself and the other two members of my team, A and C, dozed gently on the National Express coach to Bramham Park, I found myself reflecting on the last time I was at Leeds Festival. 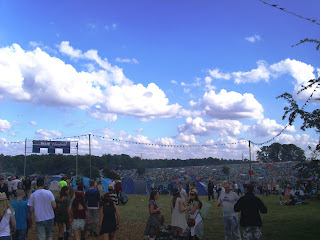 It was back in 2006, the last year there was no Glastonbury Festival. (There will be none next year either, due to a) their needing to give the site a rest, b) it being impossible to get Portaloos for love nor money next summer due to the London Olympics.) I was jointly leading a team of ten intrepid volunteers to raise funds for our union’s regional Young Members network. This was also the year that marked the beginning of my education in why it is unwise to trust people you haven’t met to turn up and volunteer.

Two of my potential twelve volunteers dropped out the night before due to illness and childcare problems, which was fair enough. Another asked to travel separately to the rest of the group, turned up, collected her pass, and didn’t work the festival; we never saw her again. There were other members I hadn’t met before they turned up at the coach station; looking back, it’s amazing that things worked out at all. (Since then I insist on character references for people from their line managers, and that the team meets for a briefing and travels together. I also hit people from the start with the “you have to commit to it months in advance, you’ll be on your feet for seven hours a day, and if you serve alcohol to under-18s, you’ll be paying an £80 fine” approach. It may be tough but it well works.)

Apart from that, I remember good things of Leeds 2006, funnily enough. Except for one of the bar managers, who was universally hated by everyone in the bar. He opened his account with us by being found in the bar we did our late-night shift on the Thursday in, lying in the bar’s rest area claiming to be too drunk to stand up. He then bossed everyone around for the rest of the week, to the extent that even I wanted to dot him with a trayful of twelve pints of stale lager.

Oh yeah, apart from that… I remember seeing Franz Ferdinand in my 20-minute rest break (I snuck out of the back of the tent and into the arena to get a better view), who were great. I also remember trying to force my way into the NME tent to see the Kooks. The crush was so bad that we made no progress, until eventually someone yelled “Sod the bloody Kooks, let’s get out of here.” I took their advice and shoved my way back out of the tent and back towards air. It was at this point I realised I had lost all my team, no-one was responding to my text messages, and I was facing the prospect of spending the entire Friday night on my own… until suddenly one of them appeared in front of me. Our catching sight of each other must have been a thousand-to-one chance, but it happened. The rest of the night was fun.

This was also where the famous “I Predict a Riot” event occurred. We were on the main stage bar. It could just be that at the time I was less experienced a bar worker and thought the crowd was worse than it actually was… but I remember queues ten deep at the bar and servers tripping over each other running around the bar. The MDUs pour twelve pints at a bar, and the trays literally would not touch the table before people snatched the pints out of them and dashed off. At the time, we had cup holders that would hold six pints at a time, and people would order two or three of them at a time to save having to come back to the bar. I was trying to fill one, waiting at the table for the machine to pour, when the harassed person on it yelled “It’s only doing three pints at a time! Sorry!”.

I turned round and caught sight of the queue for the first time. I could not see daylight between their heads, they were so closely packed together.

And then, with perfect timing, the Kaiser Chiefs struck up with “I Predict a Riot”. Thanks a bundle, Ricky Wilson.

Funnily enough, I discovered at Leeds 2011 that my memories are wrong. I’ve actually seen Muse not three times, but four; I saw them at Leeds 2006. This was before I really became a Muse-head though.

This time around, things were different. I deliberately gave up my place at Glastonbury 2011 to go to Leeds, which was not an easy choice. (I’m entitled to one place at one festival each year as a reward for doing the organising.) But when the festival headliners are Muse, My Chemical Romance and Pulp, supported by Elbow… well, when your four favourite bands are headlining, there can be only one choice, even when you love Glastonbury as much as I do.

The coach bumped its way into the coach park, and we hopped off into blazing sunshine.
Posted by CyclingDiver at 17:11