Leeds Day 1, Part the Third: The View From Up Here 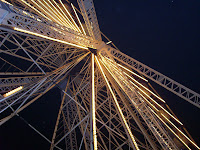 Again, my team bravely faced the Demons of Poor Organisation and Poor Timekeeping. Yup, we ended up as the only team on the bar. Three of us in one of the busiest bars on site. All credit to the bar management, who pitched in with a will, but we stayed on for two extra hours, and the team supposed to be relieving us failed to turn up despite the manager’s increasingly desperate radios to the site office.

After two extra and highly frantic hours, we’d finally had enough and left the unfortunate bar management staff to cope. There’s a limit to how long you can keep going on your feet with no break and no food. We reached ours, and left in search of food, which we found in the form of a Thai curry in the main arena. I’m usually good at truffling out the food stalls on site that make food out of actual ingredients, and my nose had not deserted me.

A curry and a pint later, we roamed throughout the site, vaguely intending to get into the Silent Disco tent, but the massive queue put us off. A and C headed for the Beer Company bar, and I took a ride on the Ferris Wheel, which I’ve always rather wanted to do. We rendez-voused for a quick pint and check of the weather forecast on C’s smartphone (not promising), then fell into our tents and fell asleep.
Posted by CyclingDiver at 12:36