...I then wandered toward the bar, drank a half of exceptionally bitter beer (maybe “endured” is more the word), and listened to a local band. Continuing the trend started in 2003, lunch took the form of a slice of pizza from the StoneBakedPizza van, which was doing a roaring trade. I’d managed to come out with only £20, there were no cash machines onsite, and I couldn’t be bothered to wander off into town and find one, so it was a bit like being a student again and having to account for every penny. (Something my bank manager would be happy to see me do, no doubt.)

My accounting for every penny took me around several stalls, where I purchased a keyring and dodged people wanting me to buy secondhand books and sign petitions for things I don’t know enough about. Since shopping wasn’t on the agenda, I strolled past a woman bottlefeeding a ferret in the rest tent(1), and headed in the direction of the other music stage. 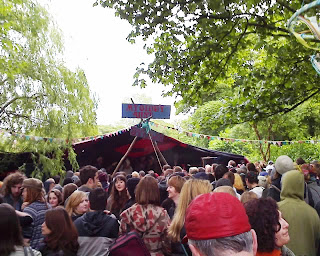 Here was the festival vibe, if you take the view that festival vibe consists of ramshackle wooden music stages watched by teenagers in black with bottles of cider, and adults with dreadlocks (and also bottles of cider). Having been to quite a few festivals in my time, that tends to be my view, and I should know because I’m often the one selling the cider. Albeit at this festival I thought it unlikely that anyone would be selling pints to two men in full Victorian British Army officer uniform, and their pal in a gorilla suit, as once happened to me in Glastonbury.

Still, people were decidedly Having A Good Time, pogoing up and down to some white-guy reggae played by several men from Cambridge with dreadlocks. Even better, there was a tea tent nearby. Or possibly a tea yurt. Either way, it had hot drinks and buns for sale, and I ordered a coffee and a cupcake. (Don’tcha love British festivals? You can’t part the British from their buns.) The man behind the counter revealed the secret of the tea yurt’s handsome profits by murmuring “Do you want a shot of brandy in that?” Answer: yes. I took myself, my cupcake and my slightly alcoholic coffee outside to groove along to the reggae, which was nearing its end, but the band refused to go quietly.

With the security staff giving them increasingly hard glares (and the police stood behind them watching the situation with expressions of “we’ll see how this pans out”), they launched into an encore, wisely choosing a song with a refrain even the thoroughly pissed could sing: “In my TREEEHOUSE, in my TREEEEEEHOOOOUSE”, so that by the time the security staff finally yanked the wires, everyone was providing the chorus. It was as close to the communal spirit of a music festival as I’ve got in some time, and I wished, not for the first time nor the last time this year, that I’d made it to Glastonbury. It was the right decision not to go, but it wasn’t an easy one. Still, I’m looking forward to Leeds. As the festivalgoers strolled out of the park in the rain (“In my TREEEHOUSE, in my TREEEEEEHOOOOUSE”), I smiled, and headed for a rendezvous with my tea.


(1) Yes, really. I don’t need to make weird stuff up for this blog. I just go into Newcastle.
Posted by CyclingDiver at 01:33