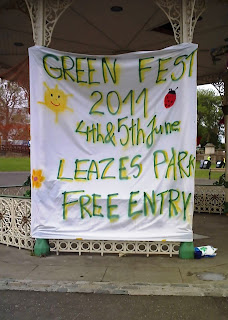 Back in June this year, I wandered on down to the Newcastle Community Green Festival at the weekend, late on Sunday afternoon. I’d hoped to get there earlier, but life got in the way, as it is wont to do.

Now in its 16th incarnation, the Green Festival and I have a long history, going back to 2002, when I first attended it in Exhibition Park with my university boyfriend at the time. I remember the sun shone and we had fun. In contrast, in 2003 I was staffing a stall on climate change with a friend from the university’s People and Planet environment campaigning group (having since broken up with the boyfriend), and it chucked it down all day. It rained to the point that a regular occurance involved sticking your head out of the marquee, yelling “Watch out!”, and then poking the tent roof with a broomstick to tip the water that was collecting in it onto the ground. I also remember watching live poetry, the joy of trying to carry a massive display board between two people all the way from Exhibition Park to Central Station and back to Durham, then eating a much-needed pizza when I got back home.

Since then, I’ve attended when I can, a highlight being when I and some friends spent a sunny afternoon there back around 2008 when it moved to Leazes Park, when the sun shone, they had a live dance music stage, and a streaker entertained everyone by running into the pond and staying there doing laps whilst the police waited for him on the shore. There was no festival in 2009 due to “financial irregularities”. I know someone who knows the organisers, and her verdict was “corruption never, possible financial confusion with the paperwork – yes”. Anyway, the festival is now back on, and I went along to enjoy.

This time around I was on my own, which didn’t particularly trouble me. I strolled on up to Leazes Park on a grey and slightly drizzly Sunday afternoon, and said hello to a friend who was staffing the Newcastle Cycling Campaign stall... (TBC)