The other best cure for seasickness is to jump in the sea. Since it’s caused by confusion between the signals for the eye and the inner ear balance mechanism, being in the sea, and thus moving with it, cures this. Hence the oft-recommended cure for seasick divers – “Just go on the next dive” – is not born entirely of heartlessness. (Although there may be an element of that among the more gung-ho instructors.) And yes, you can throw up through a scuba regulator mouthpiece underwater, though I imagine it’s not much fun.

The first batch of divers kitted up for the second dive, and jumped in. Two of them promptly jumped back out again; a diver from Edinburgh whose drysuit was leaking badly, and A, who threw up at the bottom and promptly decided he didn’t fancy half an hour’s swimming around and puking through a reg (since the cause in this case was an OD on brandy, jumping into the sea didn’t cure him).

L decided that he would take A’s place on the dive, and jumped in, leaving me with J as my dive buddy. As I kitted up, I wondered balefully if this was L’s idea of revenge over the failure-to-stop-vanishing-banana incident.

We submerged as fast as was safe. In answer to a frequently asked question, yes, you can (and we do) dive when it’s raining, but it’s not ideal for two reasons, even though we are planning to submerge ourselves entirely in water: a) rain and wind stir up the sea and lower the visibility, and the lack of light means photos don’t come out so well, b) it’s one thing to be entirely surrounded by water, and another to be bobbing about on the surface getting cold water repeatedly blown into your face. Think of the difference between swimming in the pool and getting caught in a winter downpour without an umbrella. It’s like that.

This dive immediately looked more promising. The vis was not brilliant as we were relatively near the shore, so the surge (waves going back and forth overhead) was pushing a bit of sand around, but the light was a bit better and there was immediately more to see. More plants, more fish, more rocks, and less depth, so more light to see them. Also, a welcome absence of the slightly sick feeling I’d had in the pit of my stomach. It was so mild I hadn’t realised I had it, until I submerged and it went away. (It may not surprise anyone that it was whilst diving off Eyemouth that I developed my habit of singing “I Feel Better” by Hot Chip to cheer myself up during surface intervals.)

We happily paddled about hunting for lumpsuckers. It was an interesting experience, which I’m tempting to say was a bit like diving in a washing machine, albeit the sea didn’t actually spin us around! I don’t particularly mind diving in a bit of surge or current, as it’s quite fun playing with the sea. (Albeit a wise diver never ever forgets that the sea is bigger than you are, stronger than you are, doesn’t get tired, and has no affection for you whatsoever.) 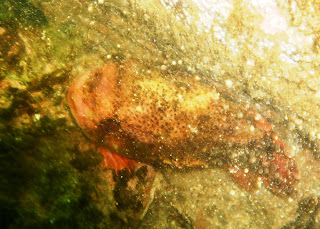 Suddenly, J spotted it. There, beneath a rock, was a flash of pink in the sandy water. I promptly swam on over, and was rewarded with a sight I’d never seen before: a lumpsucker guarding its eggs. As you can see from the photo, the “lump” part of the name is apt. They must be one of the least hydrodynamic creatures in the sea.

As for the “sucker” part, the lumpsucker has an interesting reproductive cycle. They normally inhabit deeper waters than most divers venture into, but during spring, the lumpsuckers migrate into the shallower and warmer waters near the shore to lay and fertilise their eggs.

The female lumpsucker then thinks to herself “bugger this child-rearing lark, I’m off”, and swims back into the deeper waters, leaving the male lumpsucker to guard the eggs, which are attached to rocks near the shoreline. The male then attachs himself to a rock near the eggs to defend them and keep them oxygenated by finning water over them. Since the eggs are on rocks near the shore, the swell of the tide going in and out would dislodge the male, were it not for the part that his ventral fins (the fins just below the head) form a sucker, which he uses to firmly anchor himself.

I was extremely excited by this sighting. I enjoy the sensation of diving in itself, but for me an extra-good dive is when I see something I haven’t seen before. The photo I took can be seen above. We paddled around the rocks some more, then headed on back to the boat for the journey home and a hot chocolate. Several toasted sarnies in the harbour café afterwards, and we were on our way home from the Boat of Puking Divers.
Posted by CyclingDiver at 13:27