Too bright and sunny; it was impossible to sleep inside the tents past 8am. I have a high toleration for heat, but even I found it was like trying to sleep in a greenhouse. Ironic, since the night had been freezing cold (well, not literally freezing, but so cold I’d struggled to get to sleep until I put a jumper, trousers and socks on). As the festival wore on, people began to adapt. Around 7-8am, you’d see the sleeping changeover. People in pyjamas would emerge from their tents, dragging their sleeping rolls and sleeping bags with them. Those with tents with awnings would curl up in the shade there, whilst those in smaller tents would kip in the shadow of their tent, or drape a large towel between their tent and a neighbour’s, thus creating a nice large shady spot for an al freso kip.

Nevertheless, we awoke, we stretched, we showered, we ate a cooked breakfast which was not bad except for the peculiar scrambled eggs, and then myself and N dashed off for our briefing in our bar. L, C, and T had not been assigned to a particular bar, so had an afternoon briefing, and a longer day to spend lying around the campsite relaxing.

N and I dashed about looking for our bar, found it behind a hedge near the Pyramid Stage, ducked into the backstage area, and wandered about looking for the briefing, which we knew had already started. I poked my nose into the backstage area of the bar, to be confronted by a tall young woman with long dark hair, a nose ring, a dark blue flowery dress and wellies, dangly earrings made from the loops in the middle of cassette tapes strung together, and the biggest three-cornered pirate’s hat - complete with skull - you’ve ever seen. She was one of the station managers.

We said hello, then N stuck his head in and yelled that he’d found the briefing in the staff rest area of the bar behind the tankers. WBC bars get through so much beer and cider, there are large tankers – the sort you see trundling along the M1 with “Carlsberg” written on the side – parked behind the bar tent. Meaning that a WBC bar is the only place you will hear a bartender using the excuse “Sorry I can’t serve you right now, we’re just changing the tanker”.

The briefing consisted of thirty volunteers of varying ages and genders sitting on the ground in the sunshine drinking water and listening to the bar manager, Paddy, and the assistant bar manager, Mark. Paddy was a huge bearded Irishman with a faintly piratical air, khaki shorts, a green Glastonbury T-shirt, a baseball cap and a cheerful grin. Mark was a smaller Englishman who, in his own words, was nearly thirty but looked about twelve. Paddy was running through the legal requirements of working on the bar, dwelling heavily upon the importance of asking everyone who didn’t actually have grey hair and wrinkles for ID.

As part of this, he explained the concept of the Filter of Shit. The Filter of Shit works as follows: if Paddy received from the police or the festival organisers about selling to underage people / not checking IDs / not selling correct weights and measures, he would then filter it down to Mark and the station managers, who would then filter it down to us. On the other hand, Paddy assured us, this also worked the other way and they were there to support us, so in the event of punters giving us shit about asking them for ID, we were to come and find him. “I LOVE dealing with people like that”, he declared, with the sort of grin I imagine Blackbeard would have worn upon spotting a Spanish galleon on the horizon. We went off to explore the bar area – familiar to me, since most WBC bars are set up the same way.

After that, we escaped into the sunshine and roamed through the festival site. It was all new to N, though not to me, although it was interesting to see the site so early on in the festival. I’d never been there on a Wednesday before, and it was nice to see people creating their own fun. Guitars were brought out and strummed, small stalls were opened, and people wandered freely in the sunshine sucking on large slices of watermelon. It was a truly scorching day, and for the first time ever at the Glastonbury festival I wished I’d brought a bikini.

We headed back to the WBC village to rendezvous with our friends, and found that L and C had gone off to buy chairs whilst we were gone. For a couple of hours we amused ourselves in the sunshine outside our tents, reading the programme, applying suncream, having a drink, customising the chairs with biros and generally hanging out and just chilling. They were a truly great bunch of people and I couldn’t have asked for better companions to spend the festival with. 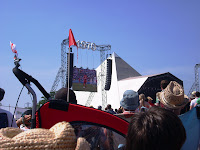 Eventually, we prised ourselves away from lolling around in the sun, and went off to watch the England match on the big screens near the Pyramid Stage. L, C & T could only stay for half an hour as they had a bar briefing, but myself and N saw the whole match, or at least some of it – our view was obscured by a man with a skull and crossbones flag, who refused to move it despite increasingly strident protests and choruses of “Shit Flag No Fans” from people standing behind him.

N and I would have met up with the others afterwards, but they had been ambushed with an unexpected shift at the bar they’d had their briefing at, so we went for a wander. I found out that one of my favourite bands, Seize the Day, were playing that evening, so N and I made plans to see them, and headed back to the WBC Village for dinner and a drink. We changed into some warmer clothing, and discovered new and interesting patches of sunburn. I had one on my chest which precisely matched where the shawl I’d had round my shoulders whilst watching England had slipped, for which I’m blaming Wayne Rooney.

We marched off to the Mandela bar, only to find it very quiet and with no sign of music. Hmm. This did not bode well. Fortunately, there were some long drop toilets nearby, so I went off to check the band’s stickers with the performance times and locations on (whilst secretly wishing that Seize the Day would advertise somewhere less fragrant).

It turned out they were in the Mandala bar, not the Mandela bar. The Mandala bar was in the Green Fields. I looked at my watch; it was 8pm. We debated whether it was worth going, since we’d arrive in time for the last few songs… N persuaded me it was worth a try. I felt a bit guilty for dragging him all over the site, but we set off with determination, and arrived by 8.30pm. The Mandala bar turned out to be less of a bar than a large café tent with a pedal-powered sound system. As we got there, there was no music drifting out, and we soon learned that technical problems had prevented the band starting on time.

Twenty minutes after we arrived, the band started, and the tent started cheering. It was a mixed crowd of families and passers-by, meaning that it was a polite sort of appreciation, but appreciation it definitely was. Seize the Day played their usual standards – “Designer Kidz”, “With My Hammer” – and gave us some new ones from their new album, with “Globalisation (The Pirate Song)” being especially popular. I trotted over afterwards to buy a CD from them, and we wandered slowly home to meet the others, who were more than slightly disgruntled at having had to work an unexpected shift. C had only had his prescription sunglasses with him (not much use if you need glasses to see and it’s dark in the tent), none of them had had warm clothing for when the temperature dropped in the evening, and L was really suffering with hayfever.

We medicated ourselves with a few drinks in the bar tent, compared our various patches of sunburn – C had the worst – and pottered off to bed. L and C kept us (and some friends we’d made who were camping nearby) awake, and entertained, for a while, with their endless affectionate arguing. I can’t remember all of it, but I do remember the following exchange:

L: “You’re just being really unfair…”
C: “Shut up, you! I should have left you in the car to bark at strangers! AARGH!”
(Pause)
T: “You putting the aftersun on your sunburn, C?”
Bundled in warm clothing against the cold night, we smiled and fell asleep.
Posted by CyclingDiver at 11:15