Things You Don't Want To Hear Upon Surfacing At The Dive Boat, I

Which would be, as I surfaced from my dive, "The engine's conked out. Steve, get the rod... we're drifting a bit close to those rocks." 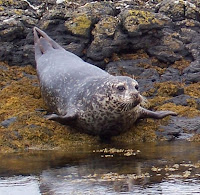 Oh, and I realised a vital piece of my equipment might one day kill me.
Winding the tape back. Yesterday I went on a boat dive to the Farne Islands. The Farne Islands are one of the North-East's, and probably the whole of the UK's best dive sites. A set of small rocky islands off the Northumberland coast, they are home to a wide variety of fish, a lot of lobsters and, most importantly, a colony of very friendly and inquisitive grey seals. Videos of divers playing with seals at the Farnes are common on Youtube, and I should add that the seals themselves like to come up and play. They are especially fond of nibbling divers' fins. I know one diver who said that, during one of his dives out there, he seemed to keep kicking his buddy in the face. No matter how hard he tried to move position to avoid it, it kept happening. Finally he turned around, and saw that a grey seal was thoughtfully chewing his fins.

As we arrived at the Farnes aboard our RIB*, the seals popped their heads up to see who was coming to play. I was doing my Deep Diver dives 2 and 3, down to 25 metres. Not my deepest ever dive - that was the 32m dive at Stoney Cove - but the deepest I've been in the sea.

We fell over the side of the boat, demonstrating the "backwards roll entry" which everyone has seen divers do, with varying degrees of proficiently. I kicked over fast to join my colleagues, who of whom suffered from seasickness and had seen his colour dramatically improve since he got off the boat and into the water. He was my buddy, and, accompanied by our instructor, J, we headed off to explore the rocks and grab some depth.

This was one of the best dives I've ever had in the UK. At least 15m vis, bright sunny weather, no serious currents or surge, and lots and lots of fish and lobsters. I tried out my new torch, marvelling at how it really did make it easier to see things even at shallow depths. We finned along, looking at lobsters and occasionally pausing to admire a passing seal, whose turn of speed we could only wish for!

We did our Deep Diver task; a straightforward out-and-back compass navigation swim on the bottom, worked our way up the wall, did a three-minute safety stop hanging onto the kelp, and surfaced, to be met with the words above.

The next hour and a half was spent drifting about as the owner tried to keep us safely anchored whilst trying to obtain a spare anchor from a nearby boat (I really hoped at one point he wasn't going to throw it into our boat) and fix the loose connection in the engine. This did NOTHING for the seasick among us, and all in all we were very relieved to hear the engine start up again!

We motored over to the buoy marking "the boilers", part of a wrecked old ship, and the site of our second dive. And as I descended down the line (wondering why the hell I could see a bathtub down there), I felt the exceptionally unwelcome sensation of my weight belt slipping around my waist. The wretched buckle had slipped along the belt, meaning that the buckle itself was now stuck under my jacket at the side, and my buddy wouldn't be able to find it in case of an emergency. I doubted it would come off, but... should I abort the dive?

I didn't, though I'm still not sure I made the right call there. If I had - no second dive. On the other hand, if my buddy had needed to get it off me, or it had slipped off completely... I did the dive holding the belt with one hand, which wasn't ideal, but did work. It didn't actually come off, but it was a severe nuisance, and I made a mental note that, first thing tomorrow, I was going to Ebay myself a new weight belt. (I did, and have it now.) A weight belt that won't release fast is technically known as a potentially fatal accident waiting to happen.

On the other hand, I still had my weight belt. J was the last one in, and we heard the following conversation:

He had, so our return home was slightly delayed as we fitted J with spare weights, and he went down there to look for it. (Senior instructors are able to dive alone safely, if they assess that it's safe to do so - the rest of us stick to diving in pairs.) One retrieved weight belt later, and we were hanging onto the boat, and heading for home! All in all, a great day.

*Rigid Inflatable Boat - popular for diving as they are fast, maneouvrable, and extremely hard to capsize.