Glastonbury Day 3, Thursday: “You Don’t Like To Complain About the Sunshine, But….”

Day 3 dawned, and the heat still continued. Better prepared for it this time, I staggered out of the tent at 6am, went for the usual semi-conscious first pee of the day, staggered back, shed most of my sleeping clothes, threw my arm over my eyes, and fell back to dozing on top of the sleeping bag. Three hours later, I awakened and wandered off to join the others for breakfast. One of our neighbours who L and C had kept amused with their bickering last night commented to me “They’re just like a married couple”. I agreed – they kept arguing all the time and never had sex. (C was sweetly devoted to his lady, and L was madly infatuated with her new boyfriend.)

It was immediately obvious that treating L’s hayfever was going to have to take priority, as her eyes were red and she could barely see. We gathered our worldly goods and wandered down the increasingly familiar dirt track from the WBC village to the festival site. We were in a good location this time, with the road from our campsite leading straight onto the Railway Track – the main road through the festival site. Fortunately, the medical centre was immediately inside the site.

Unfortunately, they were not able to help very much, instructing us to go to the pharmacy and buy eye drops. We headed off yet again in search of the elusive pharmacy. I reflected on the fact that you’d think the only pharmacy serving a festival site the size of Sunderland would be better signposted and marked on the map. L was really suffering, it was roastingly hot, and it was not the most fun walk I’ve ever had through the Festival. We eventually found it (it was one field beyond where N and I had stopped looking the night before, annoyingly), and purchased the strongest eyedrops they had for sale. T appointed herself L’s nurse: “Put them in your eyes, right now. And don’t rub them. No, don’t rub them. You’ll need to put them in again tonight, even if you don’t feel like it. And don’t rub them!” 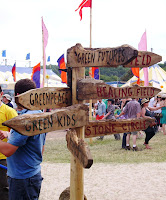 We split up to go our separate ways and have a wander before the festival started. I bought a handbag, and wandered to the Green Fields, where I went for an explore. I do love the Green Fields; they are, by far, my favourite part of the festival. Peaceful, devoted to healing and the earth, not filled with drunken wasters. If the entire festival consisted just of the Green Fields, I could probably spend a weekend there quite happily. Then again, you could easily split Glastonbury into four or five separate festivals. The sheer scale of the place takes some getting used to.

I quite fancied a massage, but all the therapists were booked up, so I went and sat in a meditation tent until peaceful harmony reigned in my world. After the stress of the last half a year, I needed to calm down a bit. Refreshed, I made my usual pilgrimage up to the top of the site; the Stone Circle and Viewing Field. I seem to remember that the Stone Circle is not actually very old – it’s a modern circle – but it looks impressive and is always surrounded by people lounging around. I wandered along, then crossed across to the Viewing Field and took some panoramic shots of the site in the sunshine, then strolled on down to start my first shift of the Festival at 5pm.

Ah, to be back behind the WBC bar… the memories came flooding back. Some were good; the time we got the main stage bar at Leeds festival, so had a frontline view of all the acts even when we were serving. Some were bad; the time I did my first-ever shift behind a WBC bar in the now-defunct Jazz Café bar at Glastonbury 2005. We were an hour late due to the mud slowing things now and the bar being incredibly well-hidden, the floods had knocked out the electric beer and cider pumps, and the water seeping into the tent had produced conditions behind the bar that led some people to compare it to trying to serve beer in the trenches. (Except, you know, without the rats, the disease, the German snipers, the poison gas and the general fear of dying a horrible death at any moment, so basically not really like being in the trenches at all.)

Some were infuriating; the time we worked an extra shift on our first day at Leeds festival until 2 in the morning, with a manager whom we found apparently completely and lying down in the staff rest area. Some were life-changing; the first time I heard Muse play live at Leeds 2006… I really have been doing this for a while.

From the start, it was obvious that the Village Inn was going to be a joy to work behind. The management team were fantastic. (Not just my opinion – many people posted on the WBC Servers Facebook page to say so!). They were supportive, they kept the bars stocked up, they worked hard, and peace and love reigned all around. Except for the people who we had to ask for ID. I hate this part of the job as I am notoriously rubbish at guessing people’s ages. On the other hand, it can be amusing. I still remember the time when I asked a young lad for ID at last year’s Glastonbury, and he presented me with a “national ID card”. I adopted my solemn face and muttered “I’ll have to see the manager”. (Actually, I didn’t need to, but when you know you’re going to have to take someone’s ID, it’s as well to pre-empt the “I want to talk to the manager” line of argument.) We both had a laugh, then I returned to inform him of the decision.

Me: I’m sorry, we’re going to have to confiscate this.
Him: Why?
Me: It’s not a valid form of ID. Britain doesn’t have identity cards. (Inside my head: “And even if it did, that isn’t how you spell ‘Parliament’.”)

He wandered off looking as though he was on the verge of tears. I probably shouldn’t have enjoyed that. Then again, most people who try to get served underage probably don’t much care about landing the person who serves them with an £80 fine. I certainly didn’t when I was roaming Wakefield’s Westgate Run aged 16 getting pissed in the pubs…

The shift ran smoothly, with the only problem being the heat. It was incredibly hot inside the tent, and I tried not to think about what it was going to be like in the full heat of the day for the 2pm shift tomorrow. The phrase “sauna with beer” jumped to mind. It was already becoming apparent that if “Dunkirk spirit” was the catchphrase of the 2005 and 2007 festivals, “You don’t like to complain about the sunshine, but…” would be the catchphrase of 2010. As you walked around the site, you could already see people starting to colonise every available bit of shade. Trees, hedges, even bins – their shadows were filled with pink festivalgoers panting like dogs. I suppose I should have been grateful for small mercies since, although the bar was very near the toilets, there was, thank God, no smell. 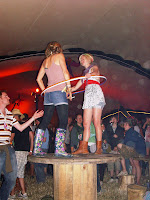 N was knackered after his shift, but I wanted to go for a wander rather than return to the WBC canteen tent and drink. I’ve got nothing against drinking in the WBC canteen tent, but we’d been doing it for two nights on the trot and I fancied a change of scene. I strolled off to look for excitement, and ended up in the Queen’s Head, a giant bar / stage / nightclub tent. A random stranger bought me a drink, and I stayed there and danced for a while, then wandered slowly back, stopping at any bar I saw that looked interesting, including one where people were dancing with hula hoops on top of giant wooden reels.
I have no idea why anyone bothers taking drugs at Glastonbury. The place is weird enough as it is.
Posted by CyclingDiver at 23:53