The Spirit Of Glastonbury...

Consists of many things. It involves...


... embracing the concept of "Festival Time" aka "Stuff will happen when it is ready to happen, so chill out and eat an ice cream"


...living in the moment 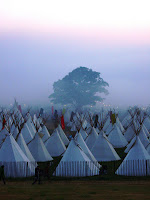 ...realising that the proper approach to standing in a queue is to mellow out and think about nice stuff, rather than shifting from foot to foot impatiently fretting pointlessly


...understanding that bedtime is a fluid concept when you don't have to work 9-5, and it's perfectly reasonable to stay up til 5am to watch the sun rise if you want to


...realising that people and music, not things or lists, are important


...realising that things not going quite according to plan can be the prelude to something totally new, unexpected and fun


...being cheerful rather than being grumpy


...sticking with your mates


...realising that when people are freed from the daily boundaries of their lives, they become fascinating

I'm aiming to carry a little of the spirit of Glastonbury into the other 51 weeks of the year. Blog coming soon.