The Tales We Keep Telling, 6: The Dead Dog In The Suitcase 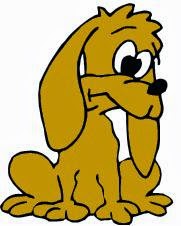 This isn't my own tale, but it is brilliant and deserves repetition. Alas, I'm not Paper Jam Jack (not his real name), who tells it better than I, but I'll give this my best shot.

You know a story will go well when the teller starts with "This story doesn't go how you think it will go. Did I tell you about the dead dog?"

The consensus, expressed at the Circus Circus event somewhere around the third round, was no. PJJ took a draught of Wylam's finest, then continued.

"Ah, well I know someone who knows someone who was asked to house- and dog- sit for some family friends. The only thing was, the dog was quite old and ill to begin with, so they actually said before they left, 'We wo't be surprised if the dog dies'."

"That can't have made for a stress-free start."

"No. So she was dog-sitting, and anyway, after a few days, the dog died in its sleep, which was a shame. The couple had gone off halfway round the world and wouldn't be back for a while, so she thought she'd better call them and find out what they wanted.

"She called them, explained about the dog, and asked what they wanted doing with the body, since they wouldn't be back for nearly two weeks. They said they wanted it keeping, so she needed to ring the vet and ask if the vet could put it in the freezer."

"They couldn't home freeze it?"

"Would you eat ice-cream that had been near a frozen dead dog? The freezer wouldn't be cold enough. So she rang the vet, and the vet said yes, they could freeze it if she brought it over. The only trouble was, the vet was in another town, and she didn't have a car, so she had to get the dead dog to the vet by public transport.

"So she wrapped the dog up in a plastic bag, and realised that the only way to move it - it was quite a big dog - was to put it in an old suitcase and trundle it onto the train. Now this is where the story doesn't go how you think it will go...

"She got on the train, and it was packed, so she needed to get the suitcase - with the dead dog inside - onto the overhead luggage rack. She wasn't too tall, and the dog was quite heavy, so she had to struggle to get the suitcase up there. Suddenly, a young man came over and helped her shove the suitcase onto the rack, and they got it up there with no problems.

She decided not to tell him the truth, but the only thing she could think of to say that was heavy enough was "Musical equipment".

"So she went and sat further down the train where there was a seat, and decided to catch up with her emails. After a while, she realised the train had stopped at a station, and she suddenly thought she ought to check if the suitcase was still there."

"The young man was running off with it down the platform."

We absorbed this in silence, then burst out laughing. The young man's face when he opened the suitcase and got out the "musical equipment" must have been one of the great faces of all time.
Posted by CyclingDiver at 00:31

Labels: the tales we keep telling