Never Seen A Man Juggle A Hat Before 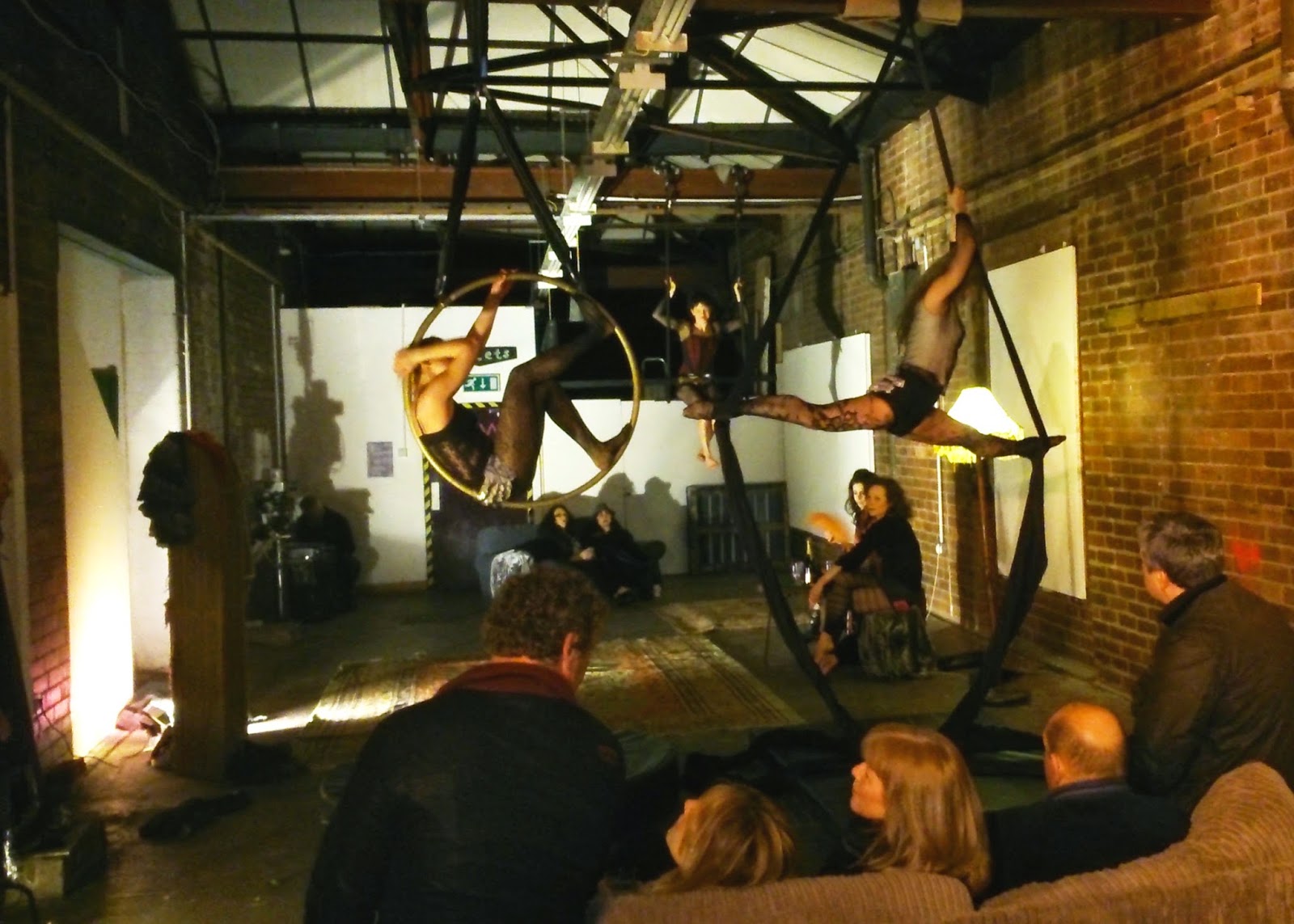 Halfway through the week, I got a text from my friend D: "Our kid's band is playing at the Star and Shadow this Friday - spread the word". I spread the word, and duly found myself at the Star and Shadow yesterday evening in the company of friends, including D. The band was on as part of the Circus Circus night, which has just started (as of yesterday), so as we walked in we were greeted with three acrobats on hoops, trapeze and ropes.

The Star and Shadow, Newcastle's independent cinema, is an interesting venue for this sort of thing. On the one hand, the main space is a wee bit small for circus performers, and means that anyone on the far side of the room wanting a drink has to sneak across the performance space and pray that they don't get dragged in for a bit of audience participation. On the other hand, everyone can see what's going on, and the proximity to the audience does add that thrilling live performance sense that something might go wrong, as indeed it did at one point, where the lady twirling a hula hoop (very gracefully, it must be said) accidentally let go and knocked over someone's pint. The audience ranged from around 10 to around 70, and everyone seemed to be having a good night, including the Tyne Bank and Wylam Breweries, whose beers were shifting fast over the bar.

The night was one half circus cabaret, and the second half D's Brother's Band playing their take on jazz classics. The circus performers were great, including the aforementioned Lady of the Rainbow-Coloured Hula Hoop, a burlesque dancer, the compere, who had a nice line in juggling hats and machetes, and a contortonist whose party piece was to feed himself through two tennis rackets at once, whilst commenting "My name is Mr Freak, and I'm here to make the world a bit stranger!". (One of my friends commented it would be even more impressive if he'd fed the tennis rackets through himself. Like Werner Herzog and his shoe.)

Carnival of Crows were the final act. I originally knew them as Elaine Binney and the Jazz Rascals, and was there for their recording of "Live at Durant Hall" (Durant Hall being part of my church, the Newcastle Unitarian Church). I'm no music critic, so my best comment is that it was great to see them perform again; they're a great band to dance to. The rest of the evening was taken up with drinking Wylam Bohemian, trying to prevent loss of life and limb being caused by another friend's dancing (impressive, but when it happens at the Boiler Shop people nearby usually clear a space), and listening to the Tale of the Dead Dog in a Suitcase. Tune in next week for the recalling of that one...
Posted by CyclingDiver at 15:38