We Are the Motherfucking Eels (at the O2 Academy) 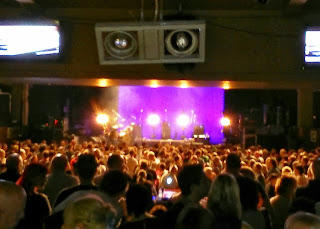 So, taking a break from Glastonbury, I went to see the Eels on 4 September, and they were good. Here's where I owe my friend A a big vote of thanks. Had it not been for him, I'd never have really got into Eels, so top marks to A for lending me their entire back catalogue, and also buying the tickest.

There's a really good review of the gig here, which saves me having to do any musical criticism. Instead, I can just say that I enjoyed the gig, apart from the O2's famously awfully-high prices for awful beer. (Thank God for hip-flasks; you didn't read that here.) The support act had listened to a lot of Laura Marling, though it could have been worse; it could have been Kei$ha.

Eels themselves were excellent. I'd forgotten how much a band can ROCK when they play live, or maybe I've just been listening to "Blinking Lights" a lot recently. "Tremendous Dynamite" was awesome, although I must admit to a slight twinge of disappointment that there was "Last Stop: This Town". Also, it is very cool when people play guitars and sing when wearing sunglasses indoors, and always will be.

I also got to see an unusual sight. Eels had a bit of a theatrical thing going on at the end of the show, with a (I'm guessing) fake tour manager who kept doing the "one more song and NO MORE" routine. This happened, we assumed the encore was over, the house lights came up, people starting heading out of the doors.. and then Eels stepped back on stage for one final song. I really wished I'd had my video out and pointing forward, because the sight of people streaming back into the fully-lit O23 arena at the end of a gig was memorably surreal.

It was a good gig. Next: Laura Marling.
Posted by CyclingDiver at 22:58