Randomly Overhead Weirdness at the Olive and Bean 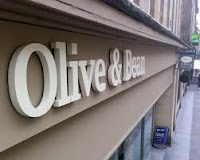 The Olive and Bean Cafe is one of my favourite hangouts. It inhabits the weird hinterland at the back of the Grainger Market, a strange mix of the posh - the Olive and Bean itself, the wool shop over the road, Cafe Royale round the corner - and the vaguely disreputable - the cheapie clothes shops, Poundland, and the infamous Black Garter pub. I rather like it (the cafe and the area) and can often be found chewing a panini there on a Sunday after church, alongside most of Newcastle's middle class.

Today I happened to be sitting on the big table in the middle, when two large, fresh-faced ginger-haired chaps dropped into chairs on the corner opposite. One was clearly a student, the other older, and they looked as though they might be related. The student fella was, apparently, also an organ scholar at Oxford. (I learned this from both their conversation and the fact that they'd left papers about an upcoming service on the table in front of them, and like many people involved in politics, I can read upside down). He had been doing a risk assessment for an upcoming service, which the older chap then proceeded to evaluate.

OLDER CHAP: "This really is very open-ended, isn't it? What they're asking? I mean, for risks, you could put 'Gas explosion', 'Meteorites', 'Terrorists running in off the streets with guns, bullets flying around'..."

YOUNGER CHAP: "Yes, it is a bit like that, they like you to put follow-on actions on there as well".

I resisted the urge to chime in with "Volcanoes exploding...". At this point, a young woman in a dress and a knitted sweater with a picture of a monkey joined them.

OLDER CHAP: "Ah, [YOUNG WOMAN], you're going to be taking care of [YOUNGER CHAP] aren't you, I've got to go soon, show him round the town?"

YOUNG WOMAN (grinning): "No, I'm planning to eat him as soon as your back is turned."

OLDER CHAP: "Well, in that case you'll still be showing him round the town, albeit with him being inside you."

The young woman pulled off her sweater.

YOUNG WOMAN: "Did I tell you, I recently grew my armpit hair to raise money for research into polycystic ovary disease?"

At this point, I made an excuse. And left.