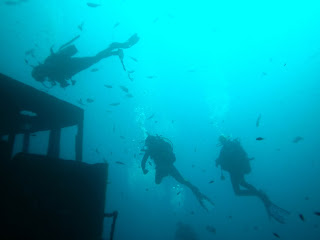 And indeed the Tugboat Rozi is a splendid wreck, one I’d really recommend to anyone. It’s mostly intact and has lots of fish, plus the cabin is open for that inevitable “diver sitting on a toilet underwater” photo that everyone likes to take. At one point my buddy spotted a barracuda in the distance. Best of all, I handled the depth, staying mostly relaxed and happy. I felt a little strange at one point, stopped, gently rose a metre or two, and it went away. Eventually, inevitably, our computers began to count down the minutes until we started to reach the ‘five minutes til you go into deco(1)’ moment.

And this is where things went a wee bit wrong.

Firstly, the current. As we headed back towards our planned exit point, we encountered a strong current which kept pushing us back towards the ship. For most of us, this was an annoyance but not a serious problem; we dropped down slightly to get out of the worst of the current. (Currents tend to be strongest the nearer you get to the surface of the water.)

Unfortunately, this was not an option for two of our number, who were running low on air and for whom dropping longer would have meant risking running too low. They stayed shallower to conserve air, and found themselves being pushed further and further backwards. My buddy, a Divemaster, noticed this, and slowed down to watch to see if they were okay. The rest of the group, alas, didn’t notice this and kept going. I did my best to keep my eyes on both the struggling two divers, my buddy, and the rest of the group, but eventually reached the point where the group had simply vanished into the blue.

The two running-low-on-air divers eventually appeared to decide to surface, and myself and my buddy tried to decide what to do next. We followed our compasses in the direction the group had taken, and eventually found ourselves near the exit point next to the lighthouse. (Again, props to the excellent maps in the "A Guide to Shore Diving the Maltese Islands" book by Peter Lemon – I saw several metal beams in the water near some rocks, and instantly recognised them from the drawing in the book as the wreckage which indicates you have found the exit.)

We looked up to see the waves crashing overhead. 6m down, the water wasn’t moving too much, but it was clearly a different story on the surface. We’d have to go around the rocky outcrop to the planned exit point at Suzie’s Pool, which, being more sheltered, would be much calmer.

I checked my air (a bit low but not dire), my computer (which was doing a safety stop for me), and my buddy. And then realised what my buddy was staring at…

(1) ‘Going into deco’ is divers’ shorthand for staying down either long enough or deep enough (or both) that you have to do a decompression stop. In other words, you have stayed under long enough that your body has absorbed so much nitrogen (from the compressed air divers breathe) that you cannot ascend directly to the surface without an unacceptable risk of getting the bends.

This is when the nitrogen dissolved in your body tissues “bubbles out” destructively on ascent, due to the decreased pressure as you ascend to shallower depths. “Bubbling out” happens on all dives, but if you have too large an amount of nitrogen in your tissues and / or you ascend too quickly, the bubbles are so large that instead of being safely transported through the bloodstream into the lungs and exhaled, they become trapped and damage your tissues and circulatory system.

When this has happened, you must do a decompression stop, where you ascend to a certain depth and stay there until you’ve exhaled sufficient of the nitrogen stuck in your system that you can ascend further without an unacceptable risk of getting the bends. This is a regular part of technical diving. Technical divers, however, carry extra gas and an entirely separate scuba breathing system with them, so that in the event of one of their sets of breathing gas failing, they can switch to the other and still safely carry out decompression. The extra gas is also calcuated to last for the length of the dive plus decompression stops and a safety margin. Finally, they carry diving computers which can calculate decompression stops based on the divers’ time and depth during the dive.

Recreational divers, of which I am one, do not carry this amount of gear as it’s not needed for dives without decompression stops. (The extra gear for technical diving is expensive, heavy, needs much more maintenance, and you have to do a lot of training and learn extra skills before you can safely dive with it. Each diver makes their own choice about whether the extra time and expense is worth it for what they want to achieve when they dive.) This means that, should you have to do a decompression and you have problems with your breathing gear or run low on gas, you face the choice every diver plans to avoid: run out of gas or get the bends. Neither is desirable.
Posted by CyclingDiver at 21:35