We were sitting around the table eating breakfast. Which, in my opinion, was far better than some of the breakfasts we’ve previously been served in the WBC village, although the others were not entirely keen on the scrambled egg.

The speaker was C. “Me and my missus are engaged.”

Loud cheers filled the tent. We congratulated C on his engagement, whilst he sat there looking as pleased as punch.

“Think the coach to Leeds will be here soon?”

“I know, I’m really sorry for misleading you. Every year other than this, it’s left at 7am on the Monday. They shouldn’t have made that change without asking us first. I’m going to complain afterwards. Are we all packed?”

“Yeah. Can’t wait to get home and see the missus-to-be. What time do you reckon?”

Overheard in the WBC Village campsite:

Me: “You shouldn’t wear trainers, they’re no good in this weather. You need sandals. See, I have them. It’s like a shoe with built-in air conditioning. These sandals is made for walking.”

Me: (deadpan) “One of these days these sandals is gonna walk all over you.”

“It should be here soon.”

“It’s baking hot, and we’re stuck in the sun. And I’m not going to go clean up the campsite. Other people get paid to do that.”

“I’m going to go help. Might as well. It’ll keep us busy. You will let us know when it gets here?”

“Should be any minute. Yeah.”

T: “Are you going to see England play? They’ve put the big screens up in the field so that people can watch.”

Me: “Hmm. No. The way I see it, if England win, I’ll get to see them play again, so it won’t matter that I’ve missed them this time. But if they lose and I go watch them, I’ll have wasted an afternoon at the Glastonbury festival which I can’t get back.”

We strolled on down the path alongside the cow barns.

C: “I’ve got that many patches of sunburn, I look like a cow anyway.”

Me: “You want to be careful, L will get confused and start trying to milk you.”

“Hope this bus hurries up. I am roasting. People will get sunstroke.”

“We’ve got some money left from the tips. Shall wehave ice lollies?”

“I’ll go get them. Anyone want a festival review magazine?” 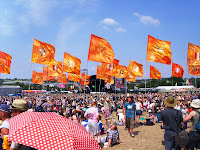 We’d all split off to do our own thing. I’d gone to see a couple of bands I fancied: Temper Trap and the Hold Steady. The Hold Steady are fronted by a cheerful plump man in glasses and a blue shirts who looks like the manager of the local Dixons, but bloody hell can they rock. They were on at the Other Stage, and I settled in with a cold cider to watch them, and jump up and down a bit.

“This is seriously a piss-take. I am not a happy bunny.”

We watched as several people moved a gazebo to cover someone in the waiting queue for the buses who was suffering badly with the effects of the heat. The bus was now an hour late. Or, from the perspective of those of us who until the previous day had expected it to be departing at 7am, six hours late. We’d been stuck in the sun since 11.30am, and we were not at all happy. Repeated enquiries to the WBC cabin elicited very little response other than “there’s nothing we can do about it”.

After the Temper Trap finished, I moseyed around a bit, ate a sandwich in the shade of a tent, checked to see if the King Blues were playing at any time when I was likely to be able to see them (they weren’t), then returned to the Other Stage to watch the Temper Trap’s melodies filling the air and mused on the fact that this year’s Festival Look was “patches of sunburn, with a straw hat on the top”. Better than the Mud Monster of previous years, I suppose.

We were still waiting for the coach, although in a new location. There were rumours that it was stuck in the car park at the top of the festival. I’d finally suggested to the WBC management that we waited in the canteen tent. People were desperate not to miss their coaches, and only repeated reassurances that they would be fetched when the coach finally arrived got them inside. It was not noticeably cooler, but being there did at least get everyone out of the direct rays of the sun.

I popped back and forth between the canteen tent and the staffing cabin to keep an eye out for the coach, noticing on the way that I had added an interesting new patch of livid red sunburn to my increasingly patchwork appearance of pale skin, tanned skin, pink skin, dusty skin, and scratches.

I texted the others to say I wished England good luck, and refrained from adding on the end “they’ll need it”. It was time to make my steady way along the Railway Track to the Avalon Tent, where Keane were due to play at 4.20pm. The Railway Track is the main pathway through the festival, and is never quiet due to this fact.

Wander along it, and the festival divides in two before you; celebrities, drink, and the Pyramid stage on the left, peace, cider and hippies on the right. The right hand side holds the Green Fields, Healing Fields, people selling candle-powered boats, and just about everyone in the festival who likes to stare into their herbal tea and mutter sadly “It’s not what it used to be”.

It also holds the Alternative Worlds area, where people put up displays showcasing other ways to live without dependence on fossil fuels. These tend to work best in sunny weather, just like 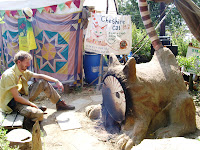 the weather we were getting, so I strayed off the beaten track.

The Alternative Worlds area is in a part of the festival with a lot of trees, so you wander around the path between the trees, stopping to look at people with biocomposting toilets and herbal gardens. I turned a corner and encountered a man cooking a pizza inside a cat, or at least inside a cat-shaped clay oven. He seemed busy, so I didn’t stop to chat. I had cider to drink and “Somewhere Only We Know” to sing along to.

The coach rolled slowly forwards, bumping over the ruts. The people inside it were too tired and fed up to do anything much but stare out of the window.

At 2.10pm, the news had arrived that the coach was stuck in the coach park at the top of the site. A lack of the correct pass to enter the site and come down to the village to pick us up had held it up there.

Some time earlier, we might have been able to pick up our weary selves and camping gear, and walk up the hill to meet it. In cooler weather, this might still have been an option. As it was, the decision was taken to wait until the coach could make its way down and pick up the bunch of weary, overheated, dehydrated and deeply grumpy volunteers.

Rarely have I ever been so glad to see a mechanical object. The only comparable instance was the 2007 mudbath when we were on the National Express coach, leaving from the coach park. It had rained pretty much solidly throughout the entire festival. Despite this, my team still managed to find moments of fun amidst the mud, but on a Monday morning with no beer, no music, nothing to look forward to, and a solid wall of rain beating down on you, we had but one thought in our heads: “get us the fuck out of here”.

We arrived to find a scene which I’ve read described elsewhere as “being like the end of the world”; masses of cold, confused, tired people wandering around beneath the grey skies, in the wind and rain and mud, being yelled at by people with megaphones. The coach park fills two fields and has about 26 different queues. We had no idea which one was for our coach, and nor did the hapless stewards.

Displaying that unique form of teamwork which only desperation can fuel, my team divided into pairs and combed the coach park until we found the National Express queues. I have never been so glad to see a grumpy coach driver wielding a roll of bin liners in my life. As the coach left the festival coach park, and I stared out of the window at the mass of forlorn humanity, some of whom had been TURNED AWAY from the coaches they had tickets for, due to being covered in mud (I am not making this up), I reflected that I might at that moment be wearing only a t-shirt and a pair of shorts (these being my only clothes not covered in mud), I might be going to spend the next three days removing mud from my belongings, but, thank God, I was going home to my warm, centrally heated house with its cosy bed and hot shower.

I hadn’t thought I’d be that glad to leave Glastonbury again, but it turned out I was wrong.
Posted by CyclingDiver at 13:46