We headed in search of food. Specifically, a stonebaked pizza. There was a huge queue, which is always the way. The only van that doesn't have a huge queue is the "Goodness Gracious Healthy Foods" vegan stall. Here, all was chaos and order as people with flour in their hair ran around throwing dough about and yoicking pizzas in and out of ovens. I ordered one with butternut squash on, and it was delicious.

With time to kill, I joined A in seeing Noah and the Whale - the 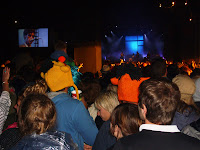 deal being that I saw them with her, and she saw My Chemical Romance with me. I'd never seen them before and was curious. And they were very, very good. The turnout was fantastic. We were stood near the back, behind two men with matching Bert-and-Ernie-from-Sesame-Street hats, but it did look like the band were thrilled by the crowd, and made every effort to give them a good time. We jumped up and down, we sang along to "Bohemian Rhapsody", and I'd discovered a new band.

From the new to the old, as it were; it's somewhat of a surprise to think that My Chemical Romance have been around for ten years. (Possibly not as much of a surprise as it may be for the band, given their previous personal histories.) Leeds and Reading, famously, were when they were bottled by angry Slayer fans. (Gerard Way's take on it: "So I come on stage, I have white hair, I look like a super creep, everything about me screams 'Throw piss at me'...".) They swore that they would not return unless they were headlining, and four years on, here they were, and here was I. Having missed them in 2007, I would have been deeply, deeply, irritated if it had happened again, but it hadn't. And, even better, it wasn't bloody raining.

I had that faint nervousness I usually get around watching My

Chemical Romance live, although I was distracted by 30 Seconds To Mars's final show, in which the audience were invited to invade the stage, and did so with gusto, screaming along to a song the name of which I do not know. Gotta say they don't grab me. All was silent... and then, BANG, My Chem were onstage and I forgot all nervousness and tiredness, and prepared to be entertained.

And boy, were we entertained. C, A and I jumped up and down until we spilled our drinks. I have never seen a band give so much to one performance, with the possible exception of Blur at Glastonbury 2009. You could see in their eyes "We are headlining, and fuck it, we will demonstrate that we have got what it takes". (What they didn't have was Brian May, who only showed for Reading, but frankly I didn't care.) A asked wryly if Gerard Way's hair was really that colour. (Me: "The colour depends on what album they're promoting at the time".) It was a brilliant, brilliant gig. The only very minor thing I would have changed is the absence of "Bulletproof Heart", which is probably my favourite My Chem song, but you can't have it all.

Back to the WBC village, still riding the high, and we joined in the late-night party in the bar. I drank slightly too much, learned the words to "I Wanna Be Sedated" by the Ramones, and we had a great time. One day left, and so far it had been brilliant. Could Pulp knock it out of the park for the trifecta? We could only wait and see!
Posted by CyclingDiver at 23:14