And now it was Muse's turn to dazzle. Oh, how we looked forward 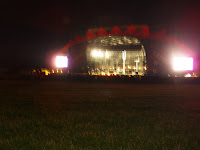 to it. I'd strolled past the stage being tested the day before, and taken some rather blurry photos of giant tuning forks, instantly recognisable to any Muse fan as the image from the CD cover of "Origin of Symmetry", which Muse intended to play in its entirety. This split opinion. Some thought it brave, others pointed out that their most famous tracks ("Hysteria", "Supermassive Black Hole", "Stockholm Syndrome") are from albums 3 and 4 and no-one apart from die-hards can remember what "Screenager" or "Hyper Music" sound like.

Personally I was in favour of it, on the grounds that a band that just gives people what they want is a band doomed to achieve little more in future. Also, let's face it, when you can sell out Wembley Stadium, you're allowed to do things because you can, which I suspect was the logic here (that, and it's ten years since "Origin" came out). I was looking forward to it, even if it did mean that I'd have to stand through "Screenager". I don't hate it as much as a friend of mine hates "I Belong To You" (from "The Resistance"), but it's not my favourite.

We passed the drinks and nibbles around, and chuckled with amusement as "What's He Building In There?" played over the speakers (I later learned this used to be how Muse used to open their gigs) and then, with a roar of sound and a light show, Muse were on stage, and "Newborn"'s opening chords blasted out over the crowd. Instant hysteria, appropriately enough. (Yes, I know that's a cliche.)

It was a good gig, although the crowd was obviously split between the diehards who were lapping up "Citizen Erased" (probably the most Muse of all Muse songs) and those who had turned up hoping for a mosh to "Hysteria" and "Time Is Running Out" and who were standing around looking confused. You could also feel the sigh of relief from the latter as the opening riff from "Plug In Baby" screeched over their heads, and it carried over into "Citizen Erased". Even "Screenager" wasn't too bad, as it was thoughtfully illustrated with a rather amusing cartoon strip, basically the plot of "Soylent Green" in four minutes done in the style of 1950s cereal adverts. And I did enjoy "Darkshines", always a favourite of mine.

After "Feeling Good" finished, it was straight into the mosh, with the old favourites causing everyone to jump up and down and forget about the mud. (A asked me "Is it me, or can you not understand a word he's saying?" after every time Matt Bellamy opened his mouth - not unfairly, I've never heard anyone so eager to finish talking to the audience and get straight back into throttling a guitar - the contrast with Guy Garvey couldn't be much bigger!) Definitely more of a gig for the fans, then, but a great one.
Posted by CyclingDiver at 16:12