"Community" Blew Up My Television 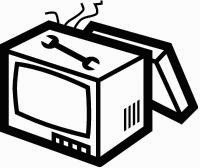 Kind of old news, by now, but it deserves a mention. I'm about to start watching "Community" again, after a pause of about a year, but doing so with some trepidation.

I used to have a really old, cathode ray TV, that came with me from my old house. Buying a new TV was on the list of things to do at some point when I moved into the new flat. The decision was made for me when, halfway through an episode of "Community" the picture suddenly began getting smaller and smaller. I couldn't work out whether it was the TV or an effect from the episode, until I heard the "fzzt", smelled the burning wiring, and saw the smoke coming from the back of the set.

It probably says something that I was torn between two reactions when I saw this: "Quick! Unplug the TV", and "Man, if I don't get a picture of this, no-one will believe me!".

Anyway, I unplugged the TV, which didn't actually catch fire, although the smell of burnt electronics lingered for a few days. I now have a flatscreen, and will give "Community" another shot this weekend. If it blows up my TV again, I'm sending the producers the bill.

In other news, the boiler is fixed.
Posted by CyclingDiver at 00:13