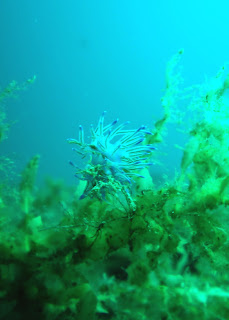 We descended gently, or in my case swiftly, to the bottom of the wall nearby and commenced exploring. This should have been a nice, gentle dive with lots of fish and interesting life on the wall to see.

I turned my head as far as I could, and there was the problem; a steady stream of leaking bubbles from the dump valve on my right shoulder. I swiftly signalled my buddy, indicated a problem, wrote on the slate “Leaking valve?” and pointed. My buddy shook her head, possibly because by this point all the air had leaked out and there was either no stream of bubbles, or a very small one.

We continued our dive for five minutes with me hoping that my buddy was right. Alas, this was not the case. I was having to drag myself across the rocks. I checked my air; down to 110bar from a full 12-litre tank (230). I’d have expected to be at around 180-170 by now, given the depth. At this point, my oh-shit-ometer started going “BEEEEEP” as I stared down at the sea floor, 22m down, and had the deeply uncomfortable thought that if I sunk down to it I might not be able to get back up again on my own without ditching my weights. This was not an irretrievable situation, but it needed dealing with now. Time to end the dive.

I practised a skill I’ve come to realise recently I need more of, that of being assertive with my buddy. I resignalled “Problem”, pointed at the valve, then pointed at the SPG. My buddy, being familiar with my levels of air consumption, realised the problem. We swam off, or in my case lumbered off, to find the rest of the gang. Alas, everyone had swum off in front of us; always a fun situation when you can’t swim fast and you need to catch up to indicate a problem. Ten minutes later, I stationed myself on a rock, whilst my buddy attempted to get the divemasters’ attention.

I managed to make eye contact with one of them (also, coincidentally, the same instructor who taught me on my Rescue Course). I signalled “Problem” and “Come here”, probably rather emphatically. I then printed on the slate “BCD VALVE LEAKING, CAN’T STAY BUOYANT”. We agreed to swim back together, ascending slowly to about six metres. At this depth the 5mm semidry suit plus the lighter tank and what little air I could keep in the BCD were enough to maintain buoyancy.

We paddled slowly along, with me keeping a wary eye on my SPG, and trying not to think about the fact that I had no fine control over my buoyancy, and if I went to the surface, no means of keeping myself float apart from my ability to swim, and my semidry suit. (Orally inflating a leaking BCD being an exercise in pointlessness.) I thought about all the functions you need your dive gear to perform both during a routine dive and in an emergency, which you never realise you relying on it to be able to do unless for any reason it can’t do it.

Nevertheless, we made it uneventfully back to the exit point and paddled back out, trying not to get knocked off our feet by the surf, which was getting up a wee bit. I shed my gear, waited for everyone else to emerge, and started planning a) lunch and b) what on earth I was going to do for the next dive.
Posted by CyclingDiver at 23:15