I’ve been diving a lot recently, hence the absence of blogging activity. I’m now a Rescue Diver following a recent trip to Bute, of which more shortly. I’m also doing my Emergency First Response course, basically a First Aid course run through the my local diving centre. Always good for laugh when you have divers pretending to be casualties and two of our senior instructors, J and T, taking the class. T actually works in the health profession and has had cause to do CPR for real on three occasions.

None of them worked out in the way anyone hoped, but apparently this is not uncommon with CPR. (Should this sort of thing happen to you, try to keel over as near to a defibrillator as possible. Apparently the odds of being successfully revived if your heart stops plummet drastically after about six minutes regardless of the quality of the CPR being performed. This little First Aid bulletin brought to you care of CyclingDiver.)

As well as Fun with EFR videos (if you have a macabre sense of humour, the EFR Training Video is not unlike an episode of Casualty with voiceovers), I’ve been jumping off a boat into the North Sea on a regular basis. Specifically, the Scimitar out of Eyemouth harbour. I rather like boat dives as they involve slightly less scrabbling up and down over rocks in full diving kit. My full kit weighs around 25 kilos, and whilst I’m reasonably fit this is still quite a lot of weight to be carrying around.

Instead, you simply stride off the boat, go for the dive, then surface, scrabble onto the boat’s trail line (the rope along the side), haul yourself along the side and stand on the boat lift, which lifts you and deposits you back on the deck just in time for a nice cup of tea and a biscuit. 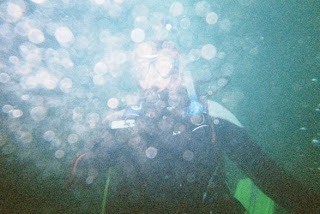 Whilst it is true that our hobby involves getting wet, it is a mistake to assume that this means divers are impervious to rain (although it must be said that a wetsuit, semidry suit or dry suit is an excellent choice for standing around in the rain). When you’re in the water, you’re no more aware of the water around you than you are of the air around you in the air world. Having cold rain blowing in your face is an entirely different experience.

Anyway, we bumped out into the chilly waters of Eyemouth, and jumped off the boat to begin our first drift dive. (A drift dive is where you drift along with the current.) Always fun, especially when, on the way up, you looked out of the window at the grey fog rolling over the sea, thought “It’ll be fun for the captain trying to spot us in this”, and then thought “Did I put my surface marker buoy* and reel back onto my buoyancy jacket after I took the jacket in to be serviced? No, I did not.” My strobe** had also packed in after it flooded on a recent shore dive, although I did have a smaller automatic strobe stuck on my jacket shoulder.

This did not bode well.


* Surface marker buoy, or SMB : A six-foot inflatable fluorescent orange tube which is filled with air from the diver’s tank (usually using the spare “octopus” mouthpiece, or sometimes the diver’s exhaled breath), either on the surface or whilst the diver is submerged. Regarded as essential safety kit for boat diving as it enables the boat captain to find you in poor visibility or if you surface further away from the boat than intended, due to currents or getting lost. The reel is attached to the buoy when deploying it at depth, so that you can stay linked to it!

** Strobe: Flashing light, usually worn on the diver’s shoulder, to enable other divers to find you underwater in poor visibility. Also used on the surface when night diving. Most divers I know favour the sort made by Beaver Sports, which combines a torch and strobe and comes in handy if your main torch packs in during a dive. Also regarded as pretty much essential safety kit when doing UK dives: the vis is not always, or even often, awful, but you might as well take the strobe in case you need it, since it weighs almost nothing.
Posted by CyclingDiver at 13:12