A Ride in the Rain 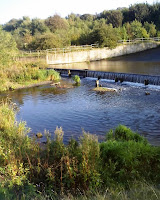 The "Cycling" part of my blogging name is still active, which is just as well, as an ear infection has temporarily stopped me diving (though I expect to be back in the water a week today). I cycle to and from work, and last Tuesday I went for a ride from work in Newcastle out to Derwenthaugh in Gateshead, shown on the left.
Boy, was it a mistake to decide I didn't need my waterproof trousers and overshoes! The top half of me was dry, but the heavens opened both on the way there and back, and my legs were drenched. Not as drenched as our group leader, who is famous for cycling in her ordinary clothes including, on this occasion, white trousers and red high heels. In a funny sort of way, I really respect that, although on this occasion it did mean that we were pedalling like maniacs to keep up with an angry Frenchwoman who wanted to get home to a towel and a shower.
It was actually quite a good ride, in a strange way. There's something in the British psyche that derives a certain pleasure in being out of doors when it's tipping it down. The world was being washed clean, and only those few of us out of doors could truly appreciate it. It wasn't that cold, and as the sun came out, we had some glorious views of the Tyne and its bridges. Even so, it was a very welcome hot chocolate that I consumed when I got in!
Posted by CyclingDiver at 12:00