Fell Off My Bike 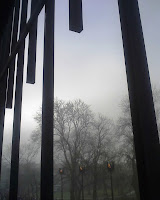 Well, actually I didn't. I encountered a patch of black ice whilst turning right at a mini-roundabout and the back wheel skidded gracefully out from under me. The bike and I described a graceful arc down to the ground, where we lay on our sides for a second or two thinking "What the hell just happened?" Luckily there was nothing coming. There never is - it's a mini-roundabout in Shieldfield, near the patch of grass where the local kids like to set fire to stuff on Bonfire Night, and it's blocked off for cars, but not to bikes, which merrily pedal their way to and from the city centre, except when it's icy. (On the left is a nice picture of the sort of morning it was, as seen from the Civic Centre.)
I was fine, if stunned. It's winter and my current cycling rig is:
base layer,
middle-layer / fleecy jumper (on very cold mornings),
cycling jacket,
knee-length cotton socks from Primark (not cool but keep your calves nice and snug),
trainers,
thermal gloves,
helmet,
balaclava (again, if really cold),
padded shorts if it's really cold,
and, most importantly, thick fleecy jogging pants. (Also from Primark. Cheap and who cares if they get muddy?).
I had plenty of padding and walked away with nothing worse than a bruise on my right outer thigh.
More importantly, I had plenty of stuff in the panniers, which provided a nice gap in between the bike/my left and the road, so the bike wasn't harmed. (Lucky - I skidded with the gears-side nearest the road.) I heal for free, but I have to pay to get the bike repaired.
Anyway, I'm currently off the road, simply due to the fact that it's now so cold all the roads are icy, and my bike is a hybrid, not a mountain bike. Excellent for commuting and touring, not so good for anything requiring extra grip in slippy conditions. I'll be back on it soon, though, and when I am? I'll be on the main roads until winter is over.
If for no reason other than, for two nights afterwards, I would fall half asleep, find myself having a cycling dream, then waking up with a start as I dreamt about sliding off.
The second time this happened, I distinctly remember thinking: "Hey! Not fair!"
Posted by CyclingDiver at 23:26